The Shechinah in Exile 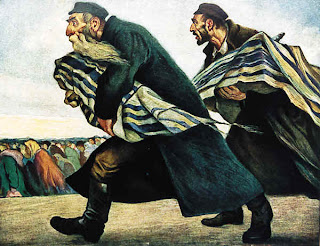 A Classic Repost in honor of Tisha B’Av:

The concept of a compassionate and personal G-d is not foreign to Rabbinic thought. One particularly interesting example is the concept of “the Shechinah in Exile.”

According to the Tanya[1] (quoting the Gemara), “When they [the Israelites] were exiled to Edom, the Shechinah went with them.”[2]

I find this to be a very powerful idea. It is a picture of HaShem not as being distant, but as rather very near to us. It is a very personal conception of G-d – an idea that G-d suffers along with Israel and is exiled alongside the Jewish people. That G-d chooses to be exiled along with His people. In thinking about this concept, I cannot help but think about Abraham Joshua Heschel’s description of “G-d in search of man.”[3] That more than we think we are pursuing G-d, G-d is actually in pursuit of us. And not only is this a G-d who pursues us, but is so moved by, and with us, that G-d too is exiled along with Israel.

This idea is actually rooted in Scripture. In several places we find references to G-d’s presence going into exile with Israel, for example:

This very personal conception of a compassionate G-d is also a popular motif within Midrash. This is especially true within a particular group of texts from Eichah Rabbah regarding “Rachel Weeping.” These texts clearly demonstrate HaShem’s compassion over Israel where G-d is described as weeping alongside Rachel:

“As soon He saw them, the Holy One, Blessed be He, immediately declared ‘HaShem, G-d of Hosts, on that day has called for crying, lamenting, pulling out one’s hair, and for putting on sack-cloth [Is. 22:12].’ If it were not written in Scripture, it would be impossible to say. [Yet], they would weep continuously from one gate to another as a man who’s dead is laid before him. The Holy One, Blessed is He, lamented and said, ‘Woe to him, to the king who succeeded in his youthfulness, but was unable to succeed in his old age.’”[4]

In this particular text from Eichah Rabbah, HaShem declares a day to cry and lament (ויקרא ה’ אלהים צבאות ביום ההוא לבכי ולמספד ), and is described as weeping along with Rachel (בוכה, ומבכה הקב”ה עמה). In another closely related text [5], “Rachel” is meant to be understood as representing both Rachel and HaShem (אל תיקרי רחל … אלא רוח-אל).

These “Rachel Weeping” passages in Eichah Rabbah (and Seder Eliyahu Rabbah) exemplify an idea similar to the concept of the Shechinah in exile represented in the Tanya. In the Eichah Rabbah passages it is not just Rachel weeping over her children, but HaShem as well. As such, these texts, along with the Tanya’s reference to the Shechinah in exile demonstrates a perception of the Divine that is personal, compassionate over the Jewish people, and actively involved our daily lives.

[1] The Tanya is one of the primary texts of Chassidut – Chassidic life and thought, and could even be said to be an introduction to “Chassidic Psychology.” It was written by the founder of Chabad Chasiddism, Rabbi Schneur Zalman of Liadi (the Alter Rebbe) and was first published in 1796.

I'm a Rabbi, writer, thinker, mountain biker, father and husband ... not necessarily in that order. According to my wife, however, I'm just a big nerd. I have degrees in dead languages and ancient stuff. I have studied in various Jewish institutions, including an Orthodox yeshiva in Europe. I get in trouble for making friends with perfect strangers, and for standing on chairs to sing during Shabbos dinner. In addition to being the Senior Rabbi of Simchat Yisrael Messianic Synagogue in West Haven, CT, I write regularly for several publications and speak widely in congregations and conferences. My wife is a Southern-fried Jewish Beltway bandit and a smokin' hot human rights attorney... and please don’t take offense if I dump Tabasco sauce on your cooking.
View all posts by Rabbi Joshua →
This entry was posted in Uncategorized and tagged Jewish History, Jewish life, Jewish Texts, Midrash, rabbinics, Talmud. Bookmark the permalink.

6 Responses to The Shechinah in Exile