Tisha B’Av: A Reenactment of Tragedy, a Glimpse of Hope 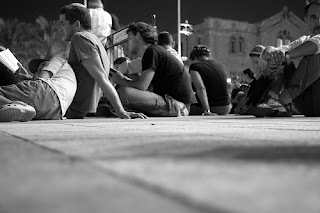 The day itself can be summed up in one word: Tragedy. On this day we remember many of the most tragic events in the history of the Jewish people which all took place on Tisha B’Av (or within just a few days of it).

Judaism is a religion of sacred drama. We don’t just remember, we relive, re-experience, and reenact events of the past. This is also true of Tisha B’Av. In going through the four associated fast days, and their accompanying customs, we relive the stages of destruction of the First and Second Temples and the loss of Jewish sovereignty.

The primary focus of Tisha B’Av is mourning. As such, the Halachah of the day draws heavily on the imagery of the death of a family member, walking through the stages of grief and sorrow.

Some events associated with Tisha B’Av include:

On Tisha B’Av it is traditional to fast, observe the customs of mourning, and hear the book of Lamentations and other mournful passages read in synagogue. The service is also accompanied by special liturgical readings known as Kinnot.

Although in our day, Tisha B’Av is associated with mourning and tragedy, according to the rabbis, when Mashiach comes the day will become of day of rejoicing. As followers of Mashiach, it seems appropriate that Yeshua applies the imagery of the Temple to himself:

“Yeshua answered and said unto them, Destroy this temple, and in three days I will raise it up.” -John 2:19

Tisha B’Av carries that hint of redemption. For out of the ashes of tragedy our redemption will sprout forth, and we will see the return of our Messiah.

May that day come speedily and soon! Until then … we wait, mourn, yearn, and prepare for that day to finally arrive.

I'm a Rabbi, writer, thinker, mountain biker, father and husband ... not necessarily in that order. According to my wife, however, I'm just a big nerd. I have degrees in dead languages and ancient stuff. I have studied in various Jewish institutions, including an Orthodox yeshiva in Europe. I get in trouble for making friends with perfect strangers, and for standing on chairs to sing during Shabbos dinner. In addition to being the Senior Rabbi of Simchat Yisrael Messianic Synagogue in West Haven, CT, I write regularly for several publications and speak widely in congregations and conferences. My wife is a Southern-fried Jewish Beltway bandit and a smokin' hot human rights attorney... and please don’t take offense if I dump Tabasco sauce on your cooking.
View all posts by Rabbi Joshua →
This entry was posted in Uncategorized and tagged Holidays. Bookmark the permalink.

2 Responses to Tisha B’Av: A Reenactment of Tragedy, a Glimpse of Hope