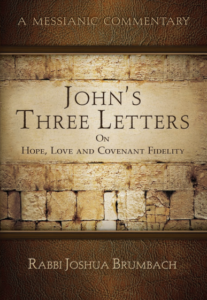 I’m excited to announce the release of my new book, a commentary, titled: John’s Three Letters: On Hope, Love and Covenant Fidelity. It is already available for pre-order on Amazon and the Lederer website.

This is part of a Messianic commentary series, published by Lederer, within which I also have a previous volume on Jude.

The Letters of John include some of the most beloved and often-quoted portions of scripture. Countless sermons have been given on their verses and they are intimately familiar to innumerable individuals across time. Therefore, most people conversant on the Bible – scholars included – are confident they already have John’s letters figured out.

But do they really?

My challenge is to encourage you to question what you think you already know about these ancient texts, to set aside pre-conceived ideas, and approach them with a fresh perspective. Although much has already been written on these popular epistles, most of it has failed to approach them from the thoroughly Jewish world-view and hermeneutic they deserve.

There is a need for a fresh and post-supersessionist reading of John’s letters that challenges common presuppositions regarding their purpose, message and relevance. By delving into their original Jewish context we will discover a world of hope, love, and God’s ongoing covenant-faithfulness to Israel. We will also demonstrate that the author’s theology, particularly his understanding of the divine nature of Messiah, was thoroughly embedded within the Jewish world of the first century (Second Temple Judaism).

“If you are looking for a guide to make the Letters of John fresh and interesting again, this is the book for you! Conversant in both Jewish and Christian scholarship, Rabbi Joshua Brumbach builds a credible case against the modern theories asserting that the Johannine body of literature is a kind of general philosophical theology consonant with the Greek philosophical milieu of the first century. John’s letters are deeply rooted in the Hebrew Bible and the Jewish religious interpretive traditions … You may just discover that the letters of John are more practical and relevant to real earthy life in the twenty-first century than you ever realized before!”

“Rabbi Brumbach interacts with the text of the letters and with current scholarship to explain John’s messages in terms of Late Second Temple Jewish life and thought. An excellent brief commentary on John’s letters!”

“Brumbach’s commentary is a wonderful and welcome addition to the growing body of post-supersessionist New Testament interpretation. While engaging with traditional and well-established New Testament commentators, Brumbach raises a key set of issues and questions that has largely been eclipsed by the parting of the ways between Judaism and Christianity. For anyone who is interested in digging deeper into the Jewish context of the letters of John, this commentary is an invaluable resource.”

I recommend this work for all who are interested in being gently initiated into an up-to-date, concise, yet comprehensive treatment of John’s letters.

“This accessible yet scholarly commentary does readers the needed service of moving the Johannine Letters out of the realm of anti-Jewish polemic and into the realm of intra-Jewish dialogue. Rabbi Brumbach carefully highlights how the letters reveal a community wrestling with what it means to love one another for the sake of HaShem (“the Name”), especially when there are divisions and defections. There is life-giving word here for all current believers.”

So check it out on Amazon or the Lederer website and please let me know your thoughts!

I'm a Rabbi, writer, thinker, mountain biker, father and husband ... not necessarily in that order. According to my wife, however, I'm just a big nerd. I have degrees in dead languages and ancient stuff. I have studied in various Jewish institutions, including an Orthodox yeshiva in Europe. I get in trouble for making friends with perfect strangers, and for standing on chairs to sing during Shabbos dinner. In addition to being the Senior Rabbi of Simchat Yisrael Messianic Synagogue in West Haven, CT, I write regularly for several publications and speak widely in congregations and conferences. My wife is a Southern-fried Jewish Beltway bandit and a smokin' hot human rights attorney... and please don’t take offense if I dump Tabasco sauce on your cooking.
View all posts by Rabbi Joshua →
This entry was posted in Uncategorized and tagged Bible, Biblical Studies, Books, Gospels, Letters of John, New Testament. Bookmark the permalink.