What does God expect of us? 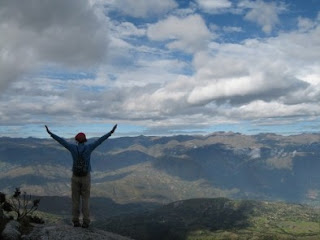 This week’s Parasha tells us that “Moshe went up to G-d, and then HaShem called to him from the mountain.” This phrase begins the retelling of the powerful story of G-d giving the Torah to Israel, and of the experience we had as a people standing before the presence of HaShem.

This interesting point is made before G-d actually gives any of the mitzvot. That point is simply that G-d expects something from us. All the blessings, mitzvot, and covenants rely on action from our part. The Torah specifically tells us that Moshe went up to G-d, and then HaShem called down to him. The giving of the Torah rested on Moshe taking the faith initiative to seek out G-d. To climb up the mountain in an expectancy to encounter the manifest presence of the Divine. It was an action, an action of faith. That is what all of the mitzvot really are – lessons in faith. Or as one rabbi once put it, the 613 mitzvot are actually 613 different ways to connect to HaShem.

Moshe did his part, so that G-d could do G-d’s part. And the response was just as tremendous. Before we as a people even had an opportunity to hear all of the mitzvot, G-d required that we first make a choice, by faith, to follow in His ways before we even knew what would be expected. And by faith, we the Jewish people accepted the Torah before it was even given:

Judaism teaches us that we are partners with G-d in bringing redemption into the world. Of course G-d could have done it without our help. However, the most exciting thing is that HaShem gives us the opportunity for Kiddush HaShem, to sanctify the Name of G-d in the earth. We have been given the ability to see the world through a different set of lenses. Instead of viewing everything as either “holy” or “secular,” our mission as Jews is to see things as “holy” and “not yet holy.” We can either see the world as mundane, or take simple everyday acts and elevate them to a level of holiness.

G-d gives us the privilege of partnering with Him in bringing redemption into the world. To do our part, so that G-d can do G-d’s part. G-d stands at the door and knocks (Re. 3:20). HaShem beckons us to be faithful to the mitzvot and faithful to the covenant. Through obedience to Torah, and the pursuit of G-d’s presence, it is possible to engage and change the world, and prepare the way for the coming of our righteous Mashiach Yeshua. Bimhera v’yamenu – May it be soon and in our days!

2 Responses to What does God expect of us?