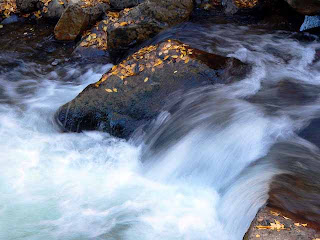 Without water, the community began grumbling against Moses and Aaron. Leaving the community, they went to the entrance of the Tabernacle and fell on their faces in the presence of HaShem. Moshe was commanded to take his staff and speak to the rock, which would produce water in response to the cries of the children of Israel.

However, leaving the Tabernacle Moshe went before the people. “You rebels,” he shouted, “Are we supposed to bring you water from this rock?” Moshe raised his staff and struck the rock twice, and water flowed in abundance.

Displeased, G-d said to Moshe and Aharon, “Because you did not trust in Me, so as to cause Me to be regarded as holy by the people of Israel, you will not bring this community into the land I have given them (Num. 20:7-12).”

So what’s the big deal?

G-d’s Name is intimately linked to the people of Israel. So much so that G-d has chosen to associate His Name with the Jewish people – i.e. “the G-d of Israel.” As HaShem’s remnant, the Jewish people have a specific role to play in the cosmos. This role is something called Kiddush HaShem – the Sanctification of the Name of G-d.

We are to be Or L’Goyim – a Light to the Nations. As Israel, we are partners with G-d in bringing redemption into the world. We are the harbingers of a cosmic message with cosmic ramifications.

The real issue is not that Moshe struck the rock. This is supported by Rashi, and other rabbinic commentators. The issue is that Moshe did not sanctify the Name of G-d in the presence of the people. Moshe’s actions were more than an “oops … I was supposed to speak to the rock, not hit it.” This was so serious that Moshe was forbidden to lead the children of Israel into the Promised Land. In some way, HaShem was dishonored in front of the entire people. Rather than Kiddush HaShem, Moshe performed a Chilul HaShem (a desecration of the Name of G-d).

The task of the Sanctification of G-d’s Name has been handed down to us. Our job in this world is to bring about glory to HaShem, and prepare the way for the coming of Mashiach. May we truly recognize the implications of what is at hand. G-d has chosen each one of us to partner with Him in bringing redemption into the world. We need to rise up, take our staffs in hand, and not only bring water to a parched people and land – but prepare the way for the coming of Mashiach. And may our righteous Messiah (who we eagerly await) lead us out of exile and into the Promised Land speedily and soon!

4 Responses to The Rock of … What?