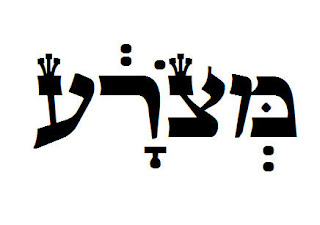 Our Torah portions this week discuss the malady of tzara’at. I have previously discussed how tzara’at is not what we often think it is. Although it is common to understand these passages as dealing with an actual skin disease, Jewish tradition teaches that tzara’at is not leprosy at all, but a serious spiritual malady caused by Sinat Chinam – hatred without a reason.

Interestingly, there is a wealth of Jewish tradition that makes a connection between tzara’at and the Messiah.After all, the rabbis teach us that everything in the Torah concerns Mashiach. Therefore, the rabbis recognized that even within the spiritual malady of tzara’at were hidden signs of Mashiach:

This tradition of connecting tzara’at and Mashiach begins with a particular verse from last week’s parasha, in Leviticus 13:12-13:

Referring particularly to verse 13, the Talmud States (b. Sanhedrin 97a):

“The Son of David (Mashiach) will only come when every government becomes heretical.Rabah said, ‘Where do we see this in Scripture? From the verse “He has turned completely white, he is ritually pure.’”

Rashi further expands on this verse and notes, “Just as when the affliction has spread throughout the entire skin and the person is ritually pure, so too, when all the governments have become heretical, the redemption will come.”

Recognizing that the Messiah must be afflicted, and familiar with suffering, the rabbis went even further – and one of the ways they identified Mashiach in the Talmud is with the title, The Leper Scholar:

“The Rabbanan (rabbis) say that Mashiach’s name is The Leper Scholar of the House of Rabbi, for it is written, ‘Surely he has borne our grief and carried our sorrows, yet we did esteem him stricken, smitten and afflicted by G-d (b. Sanhedrin 98b).’”

The rabbis obviously recognized that this does not mean that Mashiach would literally be afflicted with tzara’at but that this was a metaphor.This connection between tzara’at and Mashiach is not unique to rabbinic literature. Rather, Yeshua himself is described in the Besorah as having compassion for the metzora (the person with tzara’at), and healing them:

“And it happened when he was in a certain city, a man covered with tzara’at saw Yeshua, and he fell on his face and implored him, saying, ‘L-rd, if you are willing, you can make me clean.’Then Yeshua put out his hand and touched him, saying, ‘I am willing, be healed.’And he commanded him to tell no one, ‘But go to the cohen and make an offering for your cleansing, as a testimony to them, just as Moshe commanded (Luke 5:12-14).”

Those with tzara’at were healed, and their healings were part of the sign of his being the Mashiach. Yeshua taught that we must forgive, and not let Sinat Chinam eat away within us:

“And when you stand praying, if you hold anything against anyone, forgive him, so that your Father in heaven may forgive you your sins” (Mark 11:25).

According to the sages, tzara’at is the physical effect of sin. It is a spiritual disease that must be kept in check. To specifically avoid tzara’at, we must avoid slander and baseless hatred. All of us have spiritual sores and wounds, which if left untreated, can fester into something much worse. That is why we must learn to forgive and let go of any kind of judgment and hatred we might have against another person. Sinat Chinam – baseless hatred will destroy us, but forgiveness and healing can set us free!

We must learn how to go before our great High Priest, Yeshua our Messiah (Hebrews 5), and let him inspect us.For through him, not only will we find healing and wholeness, but redemption as well.

I'm a Rabbi, writer, thinker, mountain biker, father and husband ... not necessarily in that order. According to my wife, however, I'm just a big nerd. I have degrees in dead languages and ancient stuff. I have studied in various Jewish institutions, including an Orthodox yeshiva in Europe. I get in trouble for making friends with perfect strangers, and for standing on chairs to sing during Shabbos dinner. In addition to being the Senior Rabbi of Simchat Yisrael Messianic Synagogue in West Haven, CT, I write regularly for several publications and speak widely in congregations and conferences. My wife is a Southern-fried Jewish Beltway bandit and a smokin' hot human rights attorney... and please don’t take offense if I dump Tabasco sauce on your cooking.
View all posts by Rabbi Joshua →
This entry was posted in Uncategorized and tagged Apologetics, mashiach, Messiah, Pieces of Parasha, torah, What Your Rabbi Hasn't Told You, Yeshua. Bookmark the permalink.