Humility and the Calling of HaShem 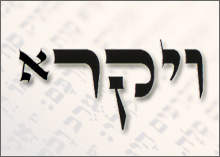 The very first word in the book of Leviticus is Vayikra – “He called”:

Interestingly, the last letter of this word – the alef – is always written in a Torah scroll much smaller than all the other letters. The obvious question is, why?

G-d’s instructions to the prophet Bilaam in Numbers 23:16 begins with a similar word –   וַיִּקָּר (vayikar). The only difference is there is no alef. This word has two connotations: It can either mean ‘chance’ (mikreh) or it can also mean ‘spiritual contamination’ (as in 1 Sam. 20:26 – regarding Kings Saul & David). Therefore, the very first word in Leviticus, Vayikra, is spelled with a small alef so that it resembles the word G-d used when speaking to Bilaam.

But again … Why? What is the Torah trying to teach us?

The small alef is a lesson in humility. If you remember back to Numbers 23, Bilaam acted in arrogance. He was being paid to curse Israel, however, every time he tried, HaShem caused him to speak a blessing (for example the beautiful blessing of “Ma Tovu …”).

Moshe must be reminded that although he too hears from G-d, he must not act like the wicked Bilaam. He must act without interjecting his own ego and self-interests. There is even a tradition that it was Moshe himself – who in his humility, first wrote this word with the small alef – reminding himself not to get puffed up “like all the other letters.”

1 Corinthians 5:6-8 also speaks about being puffed up (“It takes only a little chametz to leaven a whole batch of dough”). The point is that even the smallest amount of pride, arrogance, or sin can quickly overtake everything that surrounds it.

Therefore the small letter alef in the very first word of Leviticus was meant to remind Moshe – and remind us – to be humble in following G-d’s instructions, because in the end it is not about us, or how great we think are in observing the mitzvot – but rather it is about HaShem who desires that our actions lead to holiness.

I'm a Rabbi, writer, thinker, mountain biker, father and husband ... not necessarily in that order. According to my wife, however, I'm just a big nerd. I have degrees in dead languages and ancient stuff. I have studied in various Jewish institutions, including an Orthodox yeshiva in Europe. I get in trouble for making friends with perfect strangers, and for standing on chairs to sing during Shabbos dinner. In addition to being the Senior Rabbi of Simchat Yisrael Messianic Synagogue in West Haven, CT, I write regularly for several publications and speak widely in congregations and conferences. My wife is a Southern-fried Jewish Beltway bandit and a smokin' hot human rights attorney... and please don’t take offense if I dump Tabasco sauce on your cooking.
View all posts by Rabbi Joshua →
This entry was posted in Uncategorized. Bookmark the permalink.