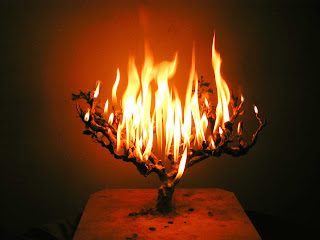 As Moshe was attending his father-in-law’s sheep in the wilderness, near the base of Mt. Sinai, the Torah tells us that an angel appeared to him in the form of burning bush (3:2). As Moshe approached the bush to discover why it was burning, and yet not being consumed, HaShem called out to Moshe from the bush (3:4).

This encounter between Moses and G-d is one of the most exciting stories in the entire Torah, and is rich with so much meaning and imagery. HaShem instructs Moshe to return to Egypt to deliver a message and liberate the Jewish people from slavery. During their encounter, Moshe asks G-d what he is to tell the people when they ask who sent him, and what G-d’s name is. And HaShem responds with one of the most amazing, mysterious, and mystical answers ever recorded – “Ehiye Asher Ehiye.”

This phrase, “Ehiye Asher Ehiye,” is one of the easiest, and yet most difficult passages of the Torah to translate. The reason is because it carries nuance, mystery, and an ever present reality. Many translations render the passage in the present tense, either as “I AM,” or “I AM Who I AM.” Many Jewish translations translate it in the future tense, “I Will Be Who I Will Be.” The Complete Jewish Bible renders it as both “I am/will be what I am/will be.”

The most fascinating thing is that they are all correct. The way this phrase is constructed renders it timeless and eternal. In Jewish mystical understanding, the phrase “Ehiye Asher Ehiye” can actually be translated in every tense, and in every combination of tenses. It can be “I am who I am,” “I will be who I will be,” “I was who I was,” “I am who I will be,” “I will be who I was,” etc.

My point in offering some various possible renditions of this phrase is not to place one particular rendering over another as a “more correct” translation, but rather to emphasize the point that all English translations struggle to convey the depth of the phrase.

The Midrash acknowledges this and also denotes that the word Ehiye describes G-d as timeless and eternal. The Aramaic Targum Onkelos alludes that this phrase is itself one of the divine names, for he does not even translate the three words into Aramaic, but leaves the phrase in Hebrew.

The response G-d gives to Moshe is itself one of the divine oracles meant to be a sign to the people. But this is often missed by non-Hebrew speakers. By G-d’s response, He is telling Moshe that He is in control of everything. That all is consumed in, by, through, and from Him. An answer that is just as deep and mysterious as G-d is. Yet, it is close and simple at the same time.

When we get into positions like Moshe, and feel overwhelmed, and that we can not possibly do all that G-d asks of us, we must remember that our G-d is not only a consuming fire, but is the source of everything that exists. And that nothing has being apart from Him. We must always be reminded of the assurance that through HaShem, we can do all things.

I'm a Rabbi, writer, thinker, mountain biker, father and husband ... not necessarily in that order. According to my wife, however, I'm just a big nerd. I have degrees in dead languages and ancient stuff. I have studied in various Jewish institutions, including an Orthodox yeshiva in Europe. I get in trouble for making friends with perfect strangers, and for standing on chairs to sing during Shabbos dinner. In addition to being the Senior Rabbi of Simchat Yisrael Messianic Synagogue in West Haven, CT, I write regularly for several publications and speak widely in congregations and conferences. My wife is a Southern-fried Jewish Beltway bandit and a smokin' hot human rights attorney... and please don’t take offense if I dump Tabasco sauce on your cooking.
View all posts by Rabbi Joshua →
This entry was posted in Uncategorized and tagged moses, mysticism, Pieces of Parasha, Spirituality, torah. Bookmark the permalink.