Over the last few weeks three more book reviews have appeared discussing my new book, Jude: On Faith and the Destructive Influence of Heresy (Lederer: Messianic Jewish Publishers, 2014). The three reviews are by First Fruits of Zion, Emet HaTorah and Dr. Richard Harvey.

Well-known and respected Messianic Jewish scholar Dr. Richard Harvey wrote a blog post today marking the date on which the Christian Church traditionally remembers Jude the Apostle and incorporated a review of my new book. It should be noted that Harvey was also one of my initial reviewers and wrote an endorsement which appears in the book itself.

Like the book of Jude itself, this short commentary punches above its weight. Brumbach introduces the book and its author in an easily accessible way, drawing from the cutting edge of contemporary biblical scholarship. He also, from his own distinctive Messianic Jewish perspective, takes us to the heart of the text and its meaning for Israel and the nations. If you want to understand more of the significance of Yeshua (Jesus) as seen by one of his own brothers then, and by a leading Jewish believer in Yeshua today, I thoroughly recommend his book. 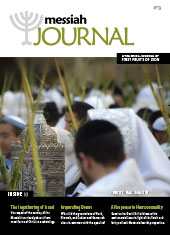 In the recent Fall 2014 issue of Messiah Journal, published by First Fruits of Zion, Jeremiah Michael wrote a very positive review of the book.

He begins his review by highlighting various parts of the text as he walks his readers through the book. In his conclusion, Michael writes:

The commentary is easy to read, not heavily academic, and it encourages a practical application of the epistle. Brumbach highlights differences of opinion amongst his sources, which gives the reader a firm grasp on the breadth of scholarship on Jude. Brumbach does a great job of drawing out the practical and ethical implications of Jude through easy-to-understand exegetical commentary … This commentary can be used for serious study of the Epistle of Jude as well as for personal devotion … The short Epistle of Jude contains a very powerful message for believers today, and Rabbi Brumbach has done an excellent job of helping us understand it. 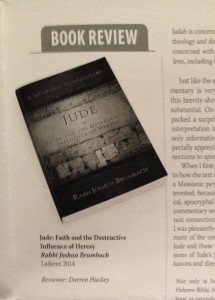 He goes on to discuss the brevity of both the epistle and my commentary (since it is only 79 pages) and notes, “The author has packed a surprising amount of research and interpretation in a few short pages. It is not only informative, but engaging as well.”

When I first saw this work I was curious as to how the text of Jude would be handled from a Messianic perspective. I was particularly interested, because of Jude’s use of non-canonical, apocryphal texts and how most Christian commentary seems to gloss over these important connections Jude makes with these texts. I was pleasantly surprised at Brumbach’s treatment of the connections between the text of Jude and these sources, as well as his conclusions of Jude’s purpose for weaving these allusions and direct references into his message.

Huckey ends his very positive review with saying, “I highly recommend this book for both personal and group study, for both academic and practical application.”

I'm a Rabbi, writer, thinker, mountain biker, father and husband ... not necessarily in that order. According to my wife, however, I'm just a big nerd. I have degrees in dead languages and ancient stuff. I have studied in various Jewish institutions, including an Orthodox yeshiva in Europe. I get in trouble for making friends with perfect strangers, and for standing on chairs to sing during Shabbos dinner. In addition to being the Senior Rabbi of Beth Emunah Messianic Synagogue in Agoura Hills, CA, I write regularly for several publications and speak widely in congregations and conferences. My wife is a Southern-fried Jewish Beltway bandit and a smokin' hot human rights attorney... and please don’t take offense if I dump Tabasco sauce on your cooking.
View all posts by Rabbi Joshua →
This entry was posted in Uncategorized and tagged Bible, Book of Jude, Book Reviews, Commentaries, Commentary, Epistle of Jude, Jude, Messianic, Messianic Jewish, New Testament, Rabbi Joshua Brumbach. Bookmark the permalink.