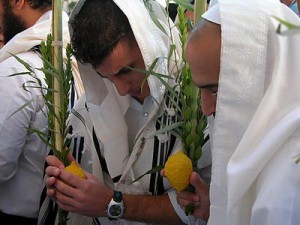 Sukkot is a joyous holiday packed with prophetic significance.  Our tradition teaches us that a time will come when all people will come up to Jerusalem to worship HaShem on Sukkot.  This is the climactic message of the Haftarah read on the first two days of Sukkot from Zechariah 14.

But the connection between the nations and Sukkot does not begin in the Messianic Age.  Rather, the connection between the two goes all the way back to Mt. Sinai.  The Jewish people are called throughout the Torah to be Or l’Goyim – a Light to the Nations.  From the beginning, God’s desire to reconcile humanity back to God’s self is mirrored most vividly in our Festival of Tabernacles.  After all, HaShem’s desire has always been macro – to reach all of humanity, beginning with the Jewish people.

Among the numerous offerings prescribed by the Torah during the Biblical seven days of Sukkot, seventy bulls were to be offered corresponding to each of the seventy nations of the world (see Gen. 10).  According to our rabbis, this was a prophetic act of intercession on behalf of the nations.  So even within the Torah, we get a small glimpse of God’s compassion and concern not just for Israel but for the nations as well.

Within this vision from Revelation, a vast crowd of martyrs representing every nation, tribe, and language are gathered around the throne of heaven in front of the Lamb.  They are holding palm branches and singing psalms of praise and adoration:

“Victory to our God, who sits on the throne, and to the Lamb … Praise and glory, wisdom and thanks, honor and power and strength belong to our God forever and ever!”

This imagery is right out of Zechariah 14 when all the nations of the world will come up to Jerusalem, carrying their Lulav and Etrog, singing Hallel, and dressed in their finest attire.

Sukkot is also known as Chag HaAsif, the Festival of Ingathering, because it is a prophetic allusion to a greater time to come.  One day, the Jewish people, alongside the nations of the world, will come together in Jerusalem to ascend the Temple Mount singing and waving the Lulav and Etrog together in praise and adoration of our LORD and King.  One day we will see the Lamb, our righteous Messiah, and will be caught-up together in heavenly ascent.

As we celebrate Sukkot this year, I pray we will all experience a taste of the World to Come.

Maranata – Come Adon Yeshua, speedily and in our day!

I'm a Rabbi, writer, thinker, mountain biker, father and husband ... not necessarily in that order. According to my wife, however, I'm just a big nerd. I have degrees in dead languages and ancient stuff. I have studied in various Jewish institutions, including an Orthodox yeshiva in Europe. I get in trouble for making friends with perfect strangers, and for standing on chairs to sing during Shabbos dinner. In addition to being the Senior Rabbi of Simchat Yisrael Messianic Synagogue in West Haven, CT, I write regularly for several publications and speak widely in congregations and conferences. My wife is a Southern-fried Jewish Beltway bandit and a smokin' hot human rights attorney... and please don’t take offense if I dump Tabasco sauce on your cooking.
View all posts by Rabbi Joshua →
This entry was posted in Uncategorized and tagged Holidays, Hoshanah Rabbah, New Testament, Sukkot. Bookmark the permalink.

4 Responses to Sukkot and Heavenly Ascent