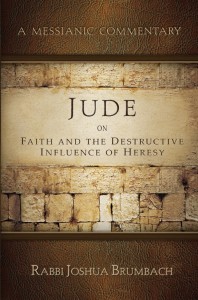 Just in time for the Summer conferences …

My new book, a commentary on the Epistle of Jude, has just been published under the title, “Jude: On Faith and the Destructive Influence of Heresy” by Lederer/Messianic Jewish Publishers (right up front for all the critics, the title was not my idea).

Some are already asking why I chose to write on the Epistle of Jude. It’s a good question. Honestly, there are two reasons. The first reason is because it is a fabulous little book that everyone skips over. However, although it might be small, it packs a major punch! This book is not as insignificant as you might think. Second, my choice was also practical. Since it is such a short book, I thought it would be much more realistic to commit to writing a commentary on Jude than on a much longer book, especially something like Hebrews or Revelation. Something like that takes years. But I have definitely been bitten by the “writing bug” and have already committed to a few more projects to be released in the next year or two, including commentaries on 2 Peter and hopefully Philippians.

I must say, you will be surprised at how much one can actually write about the Book of Jude. First of all, it is a letter written by one of Yeshua’s own brothers. This alone is significant. Second, it is a scathing rebuke of false teachers and the heresy they spread among God’s people. Third, it is also an appeal to remain faithful despite difficult times. And finally, it deals with issues and ideas that some consider quite scandalous. Therefore, how could I NOT want to write on such a fascinating book of the New Testament?

Stay tuned over the next week or so as I share more on the Epistle of Jude and my new commentary. Make sure to pick up a copy and I would love to hear your thoughts and feedback.

You can purchase the book HERE or  HERE.

I also recently heard from the publisher that it will eventually be available as an ebook.

I'm a Rabbi, writer, thinker, mountain biker, father and husband ... not necessarily in that order. According to my wife, however, I'm just a big nerd. I have degrees in dead languages and ancient stuff. I have studied in various Jewish institutions, including an Orthodox yeshiva in Europe. I get in trouble for making friends with perfect strangers, and for standing on chairs to sing during Shabbos dinner. In addition to being the Senior Rabbi of Simchat Yisrael Messianic Synagogue in West Haven, CT, I write regularly for several publications and speak widely in congregations and conferences. My wife is a Southern-fried Jewish Beltway bandit and a smokin' hot human rights attorney... and please don’t take offense if I dump Tabasco sauce on your cooking.
View all posts by Rabbi Joshua →
This entry was posted in Uncategorized and tagged Bible, Biblical Studies, Books, Commentary, Jude, Messianic, Messianic Jewish, Messianic Jewish life, New Testament. Bookmark the permalink.