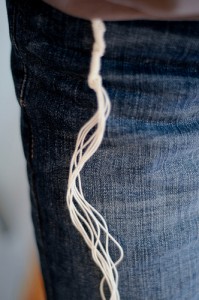 This week’s parasha begins with the sending out of the twelve spies.  After reconnoitering the land God was about to give them, they returned with news that the land was indeed flowing with chalav u’dvash, milk and honey.  However, due to their lack of faith in God, they also reported that there were fierce people dwelling there, and that the cities were fortified and well protected.

Continuing, the Torah says, “At this all the people of Israel cried out in dismay and wept all night long (14:1).” They began to grumble against their leaders, Moses, Aaron, Joshua, and Caleb; and cried out to return back to Egypt.  The people lost faith that it was possible to enter the land that God had promised them.

Joshua and Caleb pleaded with the entire community:

“If HaShem is pleased with us, then He will bring us into this land and give it to us – a land flowing with milk and honey.  Just don’t rebel against HaShem (14:8).”

Instead, the people held on to their own insecurities and Israel rebelled against HaShem, thinking that it would be better to return back to Egypt (the place of enslavement).  This lack of faith ignited God’s anger, and He appeared before all the people and threatened to destroy us.

During one of the most beautiful sections of the Torah (14:13-19), Moshe pleads with HaShem to reconsider and forgive his people.  God agreed, but with the condition that the generation who had the opportunity to enter the land, but rebelled and lacked faith, would not see the promise fulfilled.  The generation that rebelled against God was forced to return to the desert to wander for forty years.

The concluding verses of the parasha describe the commandment to wear tzitzit on the corners of our garments.  These verses are the origin for the mitzva of wearing a tallit.  God instructed that the wearing of tzitziyot were meant to be a reminder for all generations and that we must look upon them and remember our relationship and covenantal obligation to God.  Why?  “So that you shall not follow after your own heart and eyes after which you go astray (15:39).”

The wearing of tzitzit are meant to serve as safeguards against our lack of faith.  To be constant reminders of not only God’s commandments, but also to His loving faithfulness to each one of us.  All too often we focus on the negatives we are faced with each day, and forget the many times we have seen God act on our behalf.  The many miracles God has done for us, and the deliverance from that which we all have been set free from.  Just like our ancestors, we often lack faith.  We know God’s promises for our lives, but we often cower when faced with fierce opponents and well fortified lands.  It is so much easier to hide behind our insecurities and cry out to return to our own individual Egypts – the places of our individual enslavement.  Why do we wear tzitzit?  Because we constantly need reminders.  Reminders of our faith, and our constant devotion to God.  So that we, like our ancestors, will have the faith to walk-in and take back the Promised Land.

I'm a Rabbi, writer, thinker, mountain biker, father and husband ... not necessarily in that order. According to my wife, however, I'm just a big nerd. I have degrees in dead languages and ancient stuff. I have studied in various Jewish institutions, including an Orthodox yeshiva in Europe. I get in trouble for making friends with perfect strangers, and for standing on chairs to sing during Shabbos dinner. In addition to being the Senior Rabbi of Simchat Yisrael Messianic Synagogue in West Haven, CT, I write regularly for several publications and speak widely in congregations and conferences. My wife is a Southern-fried Jewish Beltway bandit and a smokin' hot human rights attorney... and please don’t take offense if I dump Tabasco sauce on your cooking.
View all posts by Rabbi Joshua →
This entry was posted in Uncategorized and tagged faith, Pieces of Parasha, torah. Bookmark the permalink.

3 Responses to Keeping the Faith