UMJC and Others Respond to Recent J4J Video 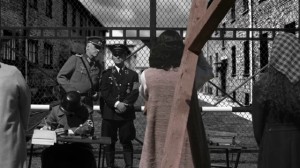 The Union of Messianic Jewish Congregations (UMJC) yesterday issued an important response to an insensitive and controversial video recently released by Jews for Jesus, called “That Jew Died for You,” along with an accompanying website.

The video, which oversimply portrays Yeshua along with other Jews being sent to their death at the famous concentration camp, Auschwitz-Birkenau, was especially tasteless considering the season and its coinciding with Yom HaShoa (Holocaust Memorial Day).

As the President of the Union of Messianic Believers (UMB) and the Senior Rabbi of Ahavat Zion Messianic Synagogue in Beverly Hills, CA, I add my own opposition to this film. The recent statement by the UMJC, as well as the recent statement by my friend and colleague, Rabbi Dr. Stuart Dauermann, both eloquently express my thoughts on the matter.

Here is the UMJC’s statement released yesterday on its website:

At the close of Holocaust Memorial day, April 27-28, the UMJC Executive Committee issued the following statement on a controversial video:

A recent Jews for Jesus video, “That Jew Died for You,” portrays Jesus (Yeshua) appearing at Auschwitz and being sent to his death along with countless other Jewish victims. The video has gained wide exposure and notoriety, including condemnation from many sources within the Jewish community. As representatives of Messianic Jewish congregations loyal both to the wider Jewish community and to Yeshua as the Jewish Messiah, we feel compelled to express our concerns about this video.

Three generations after World War II, the Holocaust remains a uniquely agonizing and troubling presence within Jewish minds and hearts. We believe the video diverts the emotional impact of the Holocaust in an effort to convey its own message, and in so doing diminishes the uniqueness of the Holocaust. Ironically, at the same time, it diminishes the uniqueness of the sacrificial death of Yeshua. Furthermore, the release of this video during the Passover-Easter season, and shortly before Yom HaShoah (Holocaust Memorial Day) appears to disregard both the history and the Jewish ethos surrounding these days.

Proclaiming Yeshua as the promised Jewish Messiah can in itself create opposition, but conveying this message in a way that is needlessly offensive is counter to the spirit of Yeshua and of his redemptive work among us.

I'm a Rabbi, writer, thinker, mountain biker, father and husband ... not necessarily in that order. According to my wife, however, I'm just a big nerd. I have degrees in dead languages and ancient stuff. I have studied in various Jewish institutions, including an Orthodox yeshiva in Europe. I get in trouble for making friends with perfect strangers, and for standing on chairs to sing during Shabbos dinner. In addition to being the Senior Rabbi of Simchat Yisrael Messianic Synagogue in West Haven, CT, I write regularly for several publications and speak widely in congregations and conferences. My wife is a Southern-fried Jewish Beltway bandit and a smokin' hot human rights attorney... and please don’t take offense if I dump Tabasco sauce on your cooking.
View all posts by Rabbi Joshua →
This entry was posted in Uncategorized and tagged holocaust, Jews for Jesus, Jews in the News, Messianic Jews, UMB, UMJC. Bookmark the permalink.