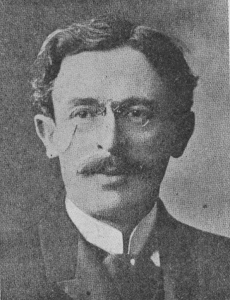 Last month I had the honor of participating in a special centennial yahrzeit ceremony for Dr. Louis Meyer, which was held at his grave site at Mt. View Cemetery in Altadena, CA (another ceremony was also held earlier that day at Biola University). Both events were organized by Professor Paul Rood, of Biola University, who has done a tremendous amount of research on Meyer and his work.

At the time of his death one hundred years ago, Dr. Louis Meyer (1862-1913) was considered a leading evangelist, theologian and statesman of the young Hebrew-Christian (early-Messianic) movement. Meyer chaired the first Hebrew Christian Conference in the United States at Mountain Lake Park, Maryland (1903), and regularly visited and surveyed the international Jewish missions operating throughout Europe, Asia, Middle East and the Americas. He reported on Jewish work for both The Missionary Review of the World and his own widely read quarterly journal, The Jewish Era. He served as the director of Jewish work for the United Presbyterian Church, and many years as the field secretary of the Chicago Hebrew Mission.

Louis Meyer was close friends with Biola University founders, Lyman Stewart and William Blackstone, and many thousands of friends distributed around the world. Today, he is remembered by but a few. His Jewish relatives in Germany perished in the Holocaust and only a few distant relations in the United States have any awareness of his significant service to Messiah. Jewish tradition regards the memorial observance of the date of the departure of a beloved ancestor as a time of remembrance of the tragedy of loss felt by family and friends as well as time to give honor to their life testimony.

When Union Oil Co. President and BIOLA founder Lyman Stewart commenced the publication of series of theological journals defending the fundamental doctrines of faith, he asked Louis Meyer to join Moody Pastor A.C. Dixon, and the former Moody dean, R.A. Torrey, on the editorial committee. This historic literary project produced the twelve volume series, The Fundamentals, spanning 1910-1915, with over three million copies distributed free of charge to Christian leaders throughout the world.

Stewart asked Louis Meyer to serve as the editorial director of the project after the first director, Rev. A.C. Dixon, resigned in 1911 to take the pastorate of the Metropolitan Tabernacle in London. Meyer produced volumes five through eleven of the series, at the scheduled rate of three per year. All the while, he maintained a grueling schedule of speaking, teaching, and other literary responsibilities.

Lyman and Milton Stewart, along with fellow Biola Board Member and founding Dean William E. Blackstone, had been Meyer’s primary financial supporters during the last ten years of his life and ministry. They hoped that he would continue to be a great “Jewish evangelist to his people, and especially to inform the Church of their duty to be a witness to Israel, and to understand God’s plan and purpose concerning Israel.” Stewart considered Meyer a “Hebrew of the Hebrews” who “came the nearest to (my) ideal of what the Apostle Paul was like than any man I ever saw.” 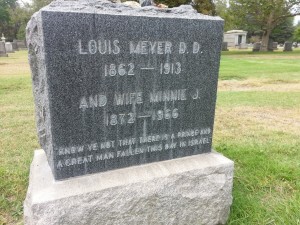 In the late fall of 1912, Meyer was struck down with a serious respiratory illness, later diagnosed as tubercular meningitis. In an attempt to save Meyer’s life, Stewart transported Meyer and his family from Cincinatti to Monrovia, California to receive intensive treatment at the Pottenger Sanitarium. Meyer held on for nearly six months, temporarily recovering enough to edit the 10th and 11th volumes of The Fundamentals from his sickbed. Meyer ultimately succumbed to his disease on July 11th, 1913 (6 Tammuz 5673), at the age young of 50.

In 1915, the new head of the International Hebrew-Christian Alliance, Rev. Sabeti Rohold, sent a letter to Lyman Stewart testifying to Meyer’s life and testimony:

I know that by your kindness my late departed and dear brother, Dr. Louis Meyer, was enabled to do a great work for His glory throughout the country in spreading the truth concerning Israel amongst God’s dear people and thus stimulated an interest in the importance of reaching them with the gospel. Many were thus led to pray for Israel and it seemed that the interest was on the increase. Dr. Meyer was a personal friend of mine. Just at a critical time in Israel’s history our dear brother was called Home and of course we all felt that it was in the middle of his work, but we had all to say “All is well what He doeth.” Now those of us who are left felt that we ought to do something to honor his memory and advance his work on behalf of the Messiah of Israel.

I'm a Rabbi, writer, thinker, mountain biker, father and husband ... not necessarily in that order. According to my wife, however, I'm just a big nerd. I have degrees in dead languages and ancient stuff. I have studied in various Jewish institutions, including an Orthodox yeshiva in Europe. I get in trouble for making friends with perfect strangers, and for standing on chairs to sing during Shabbos dinner. In addition to being the Senior Rabbi of Simchat Yisrael Messianic Synagogue in West Haven, CT, I write regularly for several publications and speak widely in congregations and conferences. My wife is a Southern-fried Jewish Beltway bandit and a smokin' hot human rights attorney... and please don’t take offense if I dump Tabasco sauce on your cooking.
View all posts by Rabbi Joshua →
This entry was posted in Uncategorized and tagged History, IMJA, Jewish History, Messianic Jews, Messianic Luminaries, pre-war Messianic Judaism. Bookmark the permalink.