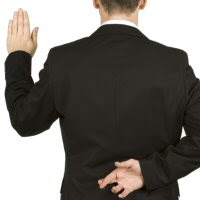 This week is another double header from the Torah – Mattot and Massei. The first parasha, Mattot, begins by describing vows and oaths sworn to HaShem. Halachah (Jewish law) takes vows and oaths very seriously.

A vow, or a neder, is described by the sages as a pledge to do something. One can either vow to prohibit oneself from something the Torah actually permits, or obligate oneself to perform a commandment that is optional. Either way, a neder is more than just the English equivalent of a “vow.” A neder is so strong, that violation of such a vow can result in a court-imposed penalty of lashes.

The second topic addressed is that of an oath, or a shavua. By means of a shavua, one may either prohibit or require oneself to perform a particular act.

Within a halachic framework, there is a great difference between a neder and a shavua. A neder changes the halachic status of an object, whereas a shavua only places the obligation on the person who made the oath.

So what’s the big deal? The Torah is describing something that heretofore could only be done by G-d: the creation a new halachic status. Through a neder or a shavua a person is now given the ability to place upon themselves or an object a status equivalent to a Torah command.

Judaism teaches that although Torah originates from HaShem, authority is also given to the community and individuals to apply the Torah within our communities and lives – with the guidance of a framework previously laid before us. Yet, Torah is meant to be wrestled and grappled with. It was never meant to be static. We are partners with G-d in not only preparing the world for the coming of Mashiach, but also in the application and revelation of Torah in the world around us.

Man has been created by G-d in order that he may finish what G-d has deliberately left unfinished. Not that G-d needs the help of His creatures, but it is His love which causes Him to impart His own Nature to the work of His hands, in order that man should have the privilege and joy of becoming His fellow-worker in this world, in natural as well as spiritual life.

In Parashat Mattot the ability to create a new halachic status (to the equivalent of a Torah command) was extended to individuals (in limited circumstances – like a neder or shavua). Previously the Torah gave authority to decide matters of halachah only to the leadership of Israel (Moses, Aaron, and the Elders). Yeshua, in turn, transmitted the ability to render halachic matters to his talmidim (his followers).

Our authority in Messiah is not only in spiritual matters, but matters of the interpretation and application of Torah as well. Whether we actually take on a neder or a shavua, a lighter commitment to G-d, or any other application of Torah within our lives; we must not do so lightly. It is a living Torah – meant to be applied and re-applied in every generation. As Levertoff wrote, there are aspects that G-d “has deliberately left unfinished.” G-d needs you and me to finish the task, to wrestle with Torah for ourselves and our communities, maintain our commitments, and prepare the world for the coming of Mashiach.

I'm a Rabbi, writer, thinker, mountain biker, father and husband ... not necessarily in that order. According to my wife, however, I'm just a big nerd. I have degrees in dead languages and ancient stuff. I have studied in various Jewish institutions, including an Orthodox yeshiva in Europe. I get in trouble for making friends with perfect strangers, and for standing on chairs to sing during Shabbos dinner. In addition to being the Senior Rabbi of Simchat Yisrael Messianic Synagogue in West Haven, CT, I write regularly for several publications and speak widely in congregations and conferences. My wife is a Southern-fried Jewish Beltway bandit and a smokin' hot human rights attorney... and please don’t take offense if I dump Tabasco sauce on your cooking.
View all posts by Rabbi Joshua →
This entry was posted in Uncategorized and tagged Halachah, Levertoff, Pieces of Parasha, torah. Bookmark the permalink.

1 Response to Vows and Oaths