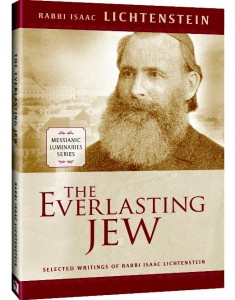 I spent last weekend reading through a preview of Vine of David/FFOZ’s upcoming release, “The Everlasting Jew: Selected Writings of Rabbi Isaac Lichtenstein.” The book will be available next week, on June 10th, but can be pre-ordered now.

As many of you already know, I have blogged quite a bit in the past about Rav Lichtenstein and many of the other great Messianic Luminaries of earlier centuries. Therefore, I was super excited when I first heard about Vine of David/FFOZ’s plans to tackle this project. And now that the time has arrived … I am thrilled to see what they have produced.

Vine of David/FFOZ has gained a reputation for producing the highest quality materials … from their Torah commentaries and books … to their new television programs. This new volume meets those same expectations – both in its scholarship and quality. Beautifully bound and produced (similar to their release of Levertoff’s classic, “Love and the Messianic Age”), using only the highest quality paper and materials, this is the next volume in their Messianic Luminaries series. Plans are in the works to release similar collections of Avram Poljak, Rabbi Yechiel Zvi Lichtenstein, and others.

Rabbi Isaac (Ignácz) Lichtenstein (1825–1908) served for over 40 years as the Chief Rabbi of the Northern district of Hungary. He was a respected authority who late in life came to the realization that Yeshua is the Messiah and suffered greatly for his conviction.

He wrote several booklets arguing that faith in Yeshua is compatible with Judaism. Eventually community pressure forced him out of his position as district rabbi, but he never accepted Christian baptism, nor did he ever join a church. He quickly became one of the most well-known Jewish believers of the late 1800’s.

The title of this volume, “The Everlasting Jew,” comes from a quote from Rav Lichtenstein:

“When the day dawns, he will be no more Jacob, but Israel, the prince with God, who shall fight the battles of HaShem and His Anointed among the nations. The everlasting Jew … will become a witness for God and his Messiah, and to him all will give ear.”

Contents of the Book

The Story of Rabbi Isaac Lichtenstein – written by Daniel Lancaster

A Bibliography of Lichtenstein’s Writings: By Jorge Quiñónez

The next section begins with some great photos of Lichtenstein, his synagogue in Tápiószele, and his recently restored tombstone. Following the photos are six chapters, with each chapter representing a different article of Rav Lichtenstein’s most well-known works:

The book concludes with a beautiful prayer Lichtenstein wrote: A Prayer for Jewish Believers, which was delivered at a conference on Jewish Missions in Leipzig in 1895.

The Everlasting Jew is an incredible contribution to the modern Messianic Jewish Community. In an age when most Jewish believers remain largely ignorant about our own recent history and the wealth of such great luminaries, this book helps to bring their great works back to life. This is a book that should be on the shelf of every committed Messianic Jew and every Christian interested in Jewish-Christian dialogue, as well as to any historian of religion.

I cannot recommend this book more highly … order yours today HERE! You will not be sorry.

Update, June 16th – You can also preview pages of the book HERE. Check it out!

I'm a Rabbi, writer, thinker, mountain biker, father and husband ... not necessarily in that order. According to my wife, however, I'm just a big nerd. I have degrees in dead languages and ancient stuff. I have studied in various Jewish institutions, including an Orthodox yeshiva in Europe. I get in trouble for making friends with perfect strangers, and for standing on chairs to sing during Shabbos dinner. In addition to being the Senior Rabbi of Simchat Yisrael Messianic Synagogue in West Haven, CT, I write regularly for several publications and speak widely in congregations and conferences. My wife is a Southern-fried Jewish Beltway bandit and a smokin' hot human rights attorney... and please don’t take offense if I dump Tabasco sauce on your cooking.
View all posts by Rabbi Joshua →
This entry was posted in Uncategorized and tagged Book Reviews, FFOZ, Messianic Jews, Messianic Judaism, Messianic Luminaries, pre-war Messianic Judaism, Vine of David. Bookmark the permalink.

7 Responses to The Everlasting Jew