On being grasshoppers and eating giants 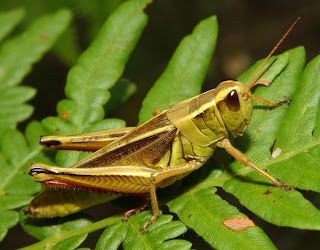 In Parashat Shelach Lecha, we meet the Jewish people at the very threshold of The Promised Land. They have very recently been liberated from generations of slavery through a dramatic series of miracles and plagues. Hashem has:

And now, barely two weeks since the giving of the Torah at Mt. Sinai, they stand at the threshold of the Promised Land, just as Hashem promised they would … and they are quaking in their boots.

10 spies tell them they’ve hit a dead end. “There are giants everywhere! We looked like grasshoppers in comparison! Let’s go back to Egypt, at least we’ll be safe there.” Only two spies offer hope. Joshua and Caleb. “Sure, there are giants, but who cares? We will eat them up! Hashem is with us, and will give us the Land as He promised.”

Sadly, it is too late. Fear has already been aroused in the hearts of the people, and they hurl stones at Joshua and Caleb. After a dramatic argument with Moses about the fate of his people, Hashem sentences the children of Israel to forty years of wandering in the desert, warning that not a single person from the generation that stoned Joshua and Caleb (not even Moses and Aaron) will live to enter the Promised Land.

Why, at the threshold of the Promised Land, after witnessing numerous jaw-dropping miracles, did our ancestors choose fear over faith? I think the answer to this question is in the text itself. When the 10 spies say “we felt like grasshoppers,” in comparison to giants, they betray their insecurity about their identity. They are a people too recently delivered from generations of slavery to imagine themselves as conquerors.

Like our people did in Shelach Lecha, I am often tempted to succumb to my own fears, and I often feel insecure in my G-d given identity. As a granddaughter of Holocaust survivors, I find it difficult to trust in Hashem’s promise that we will survive as a people, and sometimes find paranoia more comforting than faith. As a Messianic Jew who has endured heart-searing betrayal and rejection as a result of my unorthodox faith, I find it difficult to trust that Hashem puts new friends into my life for very good reasons, and that it’s OK to be open about who I am.

What I have fallen into, and what we all have the potential to succumb to, is the crippling darkness of fear. In letting the pain of the past color our vision of the future, we allow fear to smother our faith in G-d’s promises. But who are we, after all? We are not grasshoppers! We are the eaters of giants! I want to bless us that we should face our deepest fears, whatever they are, and step boldly into G-d’s promises in spite of them. For if we cannot, Hashem will surely raise up a new generation that is not intimidated by the challenges of the future.

Chocoholic, jazz head ... prone to rants, and a professional pitbull. I married a terrific guy who happens to be a rabbi, so I guess that makes me a rebbetzin. Who saw that one coming? My grandparents survived the Shoah and spent their lives in the service of others. On my best days, I walk in their footsteps.
View all posts by Monique →
This entry was posted in Uncategorized and tagged nexgen, Numbers, Pieces of Parasha, torah. Bookmark the permalink.