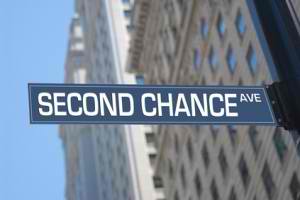 Our Torah portion this week describes further procedures for Passover and includes the implementation of Pesach Sheni, a sort of second Passover for those who were not able to observe the actual Passover for whatever reason.

It is interesting that when it comes to specific matters of redemption, G-d always makes a way for second chances.  Pesach is our great redemption/salvation from the tyranny of our spiritual and physical slavery in Egypt.  Because of the centrality of the Exodus to Jewish understanding of redemption, G-d instituted a second opportunity to observe and participate in yetziat mitzrayim, our Exodus from Egypt.

Just as HaShem gave our ancestors a second opportunity to participate in Passover, so he often does for us as individuals. There are times we really miss it … drop the ball … fall on our faces … and land on our tucheses in the deepest, darkest pits. Most of us have had moments in our lives where we have hit rock bottom.

However, throughout the Tanakh we see examples of people who were not perfect … who also fell into low places … but what makes them such exemplary figures is that they got back up. They were given second chances (and, often, third, fourth … fifth chances).

The same opportunity comes through our ultimate redemption in Mashiach.  When Yeshua first came as the suffering servant, there were many of us who did not recognize him for who he really was.  Many of our people were expecting a messiah who would liberate us from the occupation of Rome, and usher in the messianic age at that moment. However, Yeshua came not as the redeemer of Roman occupation, but as one who would overthrow spiritual oppression and set up a different kid of revolution. One in which the downtrodden and oppressed are the ones who inherit the Kingdom and become partners with HaShem in bringing about redemption. It was such a drastic and revolutionary move that many scholars and thinkers are still discussing the full ramifications of Yeshua’s work on the earth.

Like Pesach Sheni, the second Passover, there will be a second return of our beloved Mashiach. We all get a second chance, another opportunity to partner with G-d in bringing about the fullness of our ultimate redemption as individuals and as a people.  With every passing day, the second coming of Messiah draws nigh.  The question raised is are we truly ready for Mashiach to come, and are we actively preparing the word for the coming of Mashiach?  May each of us be blessed with second chances to pursue redemption, to discover our ultimate purpose, and may each of us work together to hasten the second coming of Messiah Yeshua!

I'm a Rabbi, writer, thinker, mountain biker, father and husband ... not necessarily in that order. According to my wife, however, I'm just a big nerd. I have degrees in dead languages and ancient stuff. I have studied in various Jewish institutions, including an Orthodox yeshiva in Europe. I get in trouble for making friends with perfect strangers, and for standing on chairs to sing during Shabbos dinner. In addition to being the Senior Rabbi of Simchat Yisrael Messianic Synagogue in West Haven, CT, I write regularly for several publications and speak widely in congregations and conferences. My wife is a Southern-fried Jewish Beltway bandit and a smokin' hot human rights attorney... and please don’t take offense if I dump Tabasco sauce on your cooking.
View all posts by Rabbi Joshua →
This entry was posted in Uncategorized and tagged Numbers, Pieces of Parasha, torah. Bookmark the permalink.