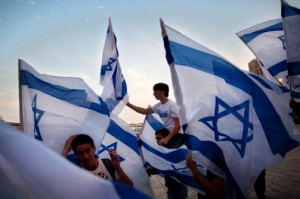 After nearly 2,000 years in exile, Israel as a nation was re-birthed in 1948. Sixty-five years later we recall not only the miracle of her existence but the cost of her resurrection. Yesterday was Yom HaZikaron – Israel’s Memorial Day, which is immediately followed by Yom HaAtzma’ut – Israel’s Independence Day. This is to remind us that Israel was birthed out of the ashes of the Holocaust and 2,000 years of struggle and persecution. As we remember Israel’s soldiers who died in defense of our Land we also recall her re-birth as an ultimate symbol of hope – or as the siddur describes it, “the first-fruits of our redemption.”

Yom HaAtzma’ut is a reminder that our hope is not lost. As long as there is an Israel, there is hope. This is exactly the point we sing in Israel’s national anthem, “Our hope is not lost – a 2,000 year old hope – to be a free people in our own land, the Land of Israel and Jerusalem.”

In honor of Yom HaAtzma’ut, one particular passage from the Talmud (b. Berachot 5a) is worth mentioning:

As we celebrate Israel’s 65th birthday, let’s do so with a renewed vigor to speak up and support not only Israel, but our faithful brothers and sisters in the Land who every day continue to make her existence a reality. Let us also work even harder to prepare the way for Mashiach’s return. For Israel and Messiah are interconnected.  Our support and rebuilding of Israel is part of preparing the way for Messiah. And may we all witness that day speedily and soon!

I'm a Rabbi, writer, thinker, mountain biker, father and husband ... not necessarily in that order. According to my wife, however, I'm just a big nerd. I have degrees in dead languages and ancient stuff. I have studied in various Jewish institutions, including an Orthodox yeshiva in Europe. I get in trouble for making friends with perfect strangers, and for standing on chairs to sing during Shabbos dinner. In addition to being the Senior Rabbi of Simchat Yisrael Messianic Synagogue in West Haven, CT, I write regularly for several publications and speak widely in congregations and conferences. My wife is a Southern-fried Jewish Beltway bandit and a smokin' hot human rights attorney... and please don’t take offense if I dump Tabasco sauce on your cooking.
View all posts by Rabbi Joshua →
This entry was posted in Uncategorized and tagged Independence Day, israel, Jewish life. Bookmark the permalink.