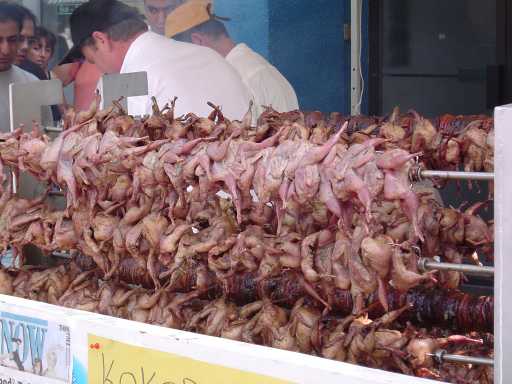 Imagine eating the exact same thing every single day. (That’s like forty years of Passover matzah) Now imagine complaining about it. Not just complaining – wailing. Standing outside your front door with your entire family carrying on as if life is no longer meaningful because all you have to eat is manna. Imagine asking for something … anything, but manna … and getting exactly what you asked for … in a deluge. Mounds of dead birds lying at your doorstep … three feet deep. Enough meat to gorge on for over a month. Now imagine getting sick of the very thing you asked for. Getting so sick, in fact, that the quail you asked for … well … it literally kills you.

“Why were the children of Israel complaining about manna?” the sages ask. According to Scripture, it was pretty tasty – the shape of a coriander seed, the color of a cloud. It tasted like the warmest, richest challah loaf baked with oil and coated with honey. Why, after being delivered from 400 years of oppression and slavery, did the people of Israel get so sick of manna that they stood outside their tents wailing about it and causing a huge spectacle of ingratitude? What caused them to romanticize their slavery in Egypt? And what can we learn from G-d’s response?

Rashi suggests that the people are tired and cranky of a long journey into the wilderness. They’re complaining because they miss the relative comforts of Egypt. Most modern rabbis who address this passage theorize that the people longed for variety in their diets. Life had become monotonous in the wilderness. Exhaustion and boredom may have been part of the problem, but I think that’s just scratching the surface.

According to Nachmanides, the people are motivated primarily by fear. Moses has just taken them from the familiar surroundings of Mount Sinai, where they had camped for two years, to a desolate wilderness, where they are uncertain about the future. They carry no grain stores on their donkeys to lean on in a food shortage. There are no weapons to defend them from attack. And their gold and jewelry is worthless in the absence of a market for trading. If they slaughtered their sheep and goats, they could not feed themselves for more than a few weeks. All they rely on is manna. It falls from the heavens each morning, and its provision seems contingent on their adherence to the commandments. The people complain, Nachmanides says, because they lack the things that give them a sense of security and knowledge that they will survive to see another day. And so they wax nostalgic about Egypt, and lose sight of the Promised Land that Moses and G-d are leading them to.

So … to answer their complaints about day after day of manna, G-d gives them day after day of meat. So much meat that they get sick of meat, and the complainers die in a plague. G-d’s response suggests many things. First, that it doesn’t matter what I dump on your heads, you’re going to get sick of it eventually. In a sense, the grass may seem greener on the other side of the fence, but spend enough time on the other side, and you’ll get sick of that, too. What G-d also says in this response is that the children of Israel remain dependent on G-d for their daily survival, and that this is a reality that is never going to change. Listen, it doesn’t matter whether it’s manna or meat. It’s food, and it keeps you alive, and you’re going to have to trust that I will rain it on your heads every morning.

What does this mean for us today? We have a tendency to sound like the children of Israel when we’re thrust into unfamiliar surroundings, or feel the stress of financial insecurity. One year ago I packed up my life, sold most of my possessions, and moved to a small apartment on the other side of the country. It’s been very easy over the past year to romanticize the last four years that I spent living and working in my former home, and to complain to G-d about how I’m already tired of the same-old, same-old here. Ultimately, my complaints originate from my insecurity. It is difficult to trust that G-d will provide for me day after day. So easy to forget G-d’s continued faithfulness through multiple moves in pursuit of G-d’s plans. Am I losing sight of the Promised Land that G-d is guiding me to?

I hope it doesn’t take three feet of dead birds at my door to remember that I’m dependent on G-d’s daily provision no matter my tax bracket, no matter my job title, no matter my mailing address? Let us remember that we have never hacked it on our own successfully, and that we remain dependent on whatever the equivalent of morning manna is in our lives. The Promised Land has not gone away. It’s still waiting for us, and G-d will bring us there when we finally figure out how to trust G-d.

Chocoholic, jazz head ... prone to rants, and a professional pitbull. I married a terrific guy who happens to be a rabbi, so I guess that makes me a rebbetzin. Who saw that one coming? My grandparents survived the Shoah and spent their lives in the service of others. On my best days, I walk in their footsteps.
View all posts by Monique →
This entry was posted in Uncategorized and tagged moses, Pieces of Parasha, torah. Bookmark the permalink.