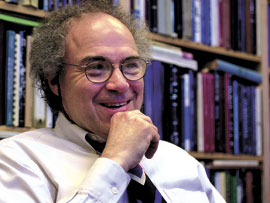 “The first mitzva transmitted to the Israelites in Egypt was the requirement to have a calendar and own their time: “This month shall mark for you the beginning of the months; it shall be the first of the months of the year for you.” (Exodus 12:1)  It celebrated the equivalent of a bar-mitzva for the nascent nation of Israel; everyone was given a watch as their gift.  They were emerging adults whose freedom meant accepting responsibility.  What’s more, having their own time as free humans meant that there was newfound opportunity to develop, to grow and to create.

I am fond of punning on the Hebrew for month, chodesh, suggesting that we read not “ha-chodesh” – this month; but “ha-chidush” – this innovative idea.  In that way, the commandment captures the essence of the Israelite revolution.  The message of Exodus is that freedom facilitates creativity and change.  Moses stands up against Pharaoh, the representative of the sun god Ra, and proclaims: We are the moon people.  We know that the sun offers stability and certainty.  But we also know that “there is nothing new under the sun” (Ecclesiastes 1:9), i.e. no chadash tachat ha-shemesh.  We are willing to leave the certainty and fixedness of the Egyptian sun, which we experience as slavery, for the uncertainty and riskiness of the waxing and waning moon because it offers the possibility of renewal and change.

This has been our clarion call as a people throughout the ages. We learned not to be satisfied with what is and always pursue what ought to be. We were taught to remember that we were slaves in Egypt where we were seduced by the grandeur of power and order only to be provoked by Moses to resist the temptation of capitulating to the promise of certainty. He urged us, rather, to pursue the freedom that is gained by engaging the Unknowable and encountering the unexpected.  For, only then will we be constantly prodded to pursue the fulfillment of our human potential.  Only then will it become clear that one of the secrets of our survival was our creative spirit that was nurtured from the onset by an obligation to innovate. This human ability to innovate is itself liberating and redemptive.”

I'm a Rabbi, writer, thinker, mountain biker, father and husband ... not necessarily in that order. According to my wife, however, I'm just a big nerd. I have degrees in dead languages and ancient stuff. I have studied in various Jewish institutions, including an Orthodox yeshiva in Europe. I get in trouble for making friends with perfect strangers, and for standing on chairs to sing during Shabbos dinner. In addition to being the Senior Rabbi of Simchat Yisrael Messianic Synagogue in West Haven, CT, I write regularly for several publications and speak widely in congregations and conferences. My wife is a Southern-fried Jewish Beltway bandit and a smokin' hot human rights attorney... and please don’t take offense if I dump Tabasco sauce on your cooking.
View all posts by Rabbi Joshua →
This entry was posted in Uncategorized and tagged Egypt, Exodus, Passover, Quote of the Day. Bookmark the permalink.