Video of the Day, Levertoff – Part 6 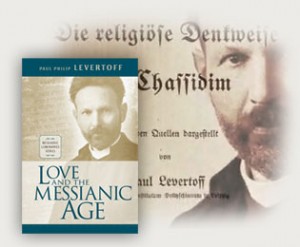 Over the last several weeks I have been posting videos as each one is released from a special series by First Fruits of Zion/Vine of David expounding on Paul Philip Levertoff’s classic work, “Love and the Messianic Age.”

The newest video (#6) was just released yesterday. And if you have not already done so, make sure to check out the other videos in the series as well!

Here is the newest video in which I introduce the concept of “Joy and Love” in chapter four.

In the fifth video, my friend and colleague, Rabbi Tzahi Shapira, introduces the third chapter of Levertoff’s work, “Fear and Love,” and powerfully illustrates the importance of hospitality as an act of partnering with G-d.

In the fourth video, Yahnatan Lasko, from the Gathering Sparks blog, further expounds on the idea of “The Law and Love,” particularly addressing the idea of where grace fits into all of this.

In the third video in the series, my good friend Yahnatan Lasko discusses the second chapter of Levertoff’s book on the topic of “The Law and Love.”

In the second video I delve into the first chapter of  Levertoff’s book, and discuss the concept of “Knowledge and Love,” and what it means to be partners with G-d in the work of rememption.

In the first video I introduce Levertoff’s recently republished work, Love and the Messianic Age, and why Levertoff is such an important figure for us today and give a few introductory remarks on Jewish Mysticism.

I'm a Rabbi, writer, thinker, mountain biker, father and husband ... not necessarily in that order. According to my wife, however, I'm just a big nerd. I have degrees in dead languages and ancient stuff. I have studied in various Jewish institutions, including an Orthodox yeshiva in Europe. I get in trouble for making friends with perfect strangers, and for standing on chairs to sing during Shabbos dinner. In addition to being the Senior Rabbi of Simchat Yisrael Messianic Synagogue in West Haven, CT, I write regularly for several publications and speak widely in congregations and conferences. My wife is a Southern-fried Jewish Beltway bandit and a smokin' hot human rights attorney... and please don’t take offense if I dump Tabasco sauce on your cooking.
View all posts by Rabbi Joshua →
This entry was posted in Uncategorized and tagged FFOZ, Jewish Believers, Jewish History, Levertoff, Messianic Jews, Messianic Judaism, mysticism, pre-war Messianic Judaism, Spirituality, Video of the Day, Vine of David. Bookmark the permalink.

1 Response to Video of the Day, Levertoff – Part 6