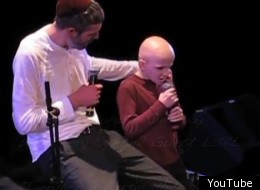 Jewish Hip-hop and Reggae performing artist, Matisyahu, who shocked his fans and many within the wider Jewish community in December for shaving off his signature beard and peyos is back in the news again this week after performing his hit song, ‘One Day’ (which was the theme song for the 2010 Winter Olympics) with a young boy named Luke Weber who is battling cancer.

In this new video that has been shared all over the world in the last couple days, Matisyahu calls up Luke to sing with him and the crowd breaks out in applause and cheers. Afterwards Luke is carried off the stage as the crowd gives him a standing ovation. This is a really moving video and well worth watching. You can watch the video HERE.

Yasher koach to Matisyahu and we pray for rafua shleimah – a quick and full recovery to Luke!

I'm a Rabbi, writer, thinker, mountain biker, father and husband ... not necessarily in that order. According to my wife, however, I'm just a big nerd. I have degrees in dead languages and ancient stuff. I have studied in various Jewish institutions, including an Orthodox yeshiva in Europe. I get in trouble for making friends with perfect strangers, and for standing on chairs to sing during Shabbos dinner. In addition to being the Senior Rabbi of Simchat Yisrael Messianic Synagogue in West Haven, CT, I write regularly for several publications and speak widely in congregations and conferences. My wife is a Southern-fried Jewish Beltway bandit and a smokin' hot human rights attorney... and please don’t take offense if I dump Tabasco sauce on your cooking.
View all posts by Rabbi Joshua →
This entry was posted in Uncategorized and tagged Jews in the News, Matisyahu, music, Video of the Day. Bookmark the permalink.

1 Response to Matisyahu Performs ‘One Day’ with Boy Battling Cancer