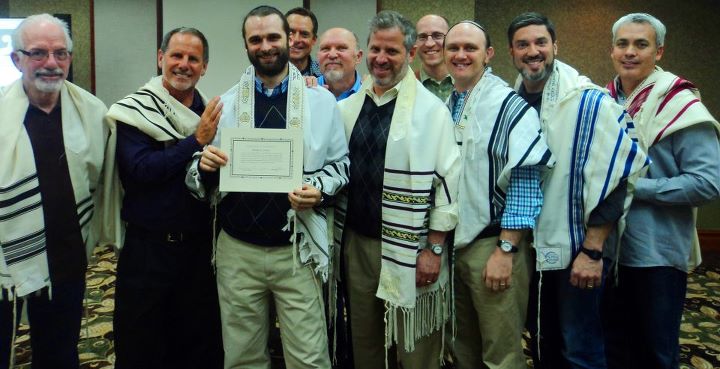 Last week at the mid-year UMJC leaders retreat in Nashville, TN, my friend and colleague, Nathan Joiner, received rabbinic ordination. I had the honor of being one of the rabbis (pictured above) to lay hands on Rabbi Joiner to grant him s’micha. Just as it was for all of us, so it was for Rabbi Joiner the culmination of years of study, mentoring under a rabbinic guide, and the completion of a recognized course of study that involved learning Hebrew, courses in Jewish life and thought, Jewish texts, theology, biblical studies, and practical matters pertaining to congregational life. Rabbi Joiner is an example of a new breed of Messianic Rabbis.

Last year I wrote a blog post titled, Are We Kosher? It was a continuation of an important discussion first raised by Rabbi Dr. Michael Schiffman on the use of the title ‘rabbi’ within the wider Messianic Jewish movement – and the regular abuse of the term.

The Messianic Jewish Rabbinical Council (MJRC), which Rabbi Joiner and myself are both part of, has been investing years into the establishment of basic standards which reflect a vibrant and Yeshua centered Jewish practice. In last year’s meetings we approved a statement defining what we recognize as a “Messianic Rabbi” and commentary further unpacking the statement.  The defining statement of the MJRC reads:

A Messianic Jewish Rabbi is a Jewish follower of Yeshua qualified by a supervised course of study, authorized by his or her ordaining authority, and empowered by the Spirit through the rite of ordination to expound and apply Torah as fulfilled in and mediated through the person, teaching, and work of Yeshua. As a custodian of Israel’s revelation and holy tradition, including the Apostolic Writings, and as a disciple of Mashiach Yeshua Rabbenu, a Messianic Jewish Rabbi teaches Israel the ways of God and models this tradition for the members of the Messianic Jewish community in a manner imbued with the Spirit of God.

You can read the expanded commentary on the above statement HERE.

This statement not only reflects the requirements of what we expect of those who are members of the MJRC, but establishes standards for the future.  I am proud to be a part of a small group of Messianic rabbis who are rabbis in every sense of the word – and have worked very hard to get to this point. The future maturity of our movement requires that we have a faith with substance as well as standards. Otherwise, what does it all really mean?

I wish a big Mazel Tov to my friend and colleague, Rabbi Nathan Joiner, on this great achievement, and welcome him into the ranks of a growing (both in numbers and maturity) Messianic Jewish rabbinate.

I'm a Rabbi, writer, thinker, mountain biker, father and husband ... not necessarily in that order. According to my wife, however, I'm just a big nerd. I have degrees in dead languages and ancient stuff. I have studied in various Jewish institutions, including an Orthodox yeshiva in Europe. I get in trouble for making friends with perfect strangers, and for standing on chairs to sing during Shabbos dinner. In addition to being the Senior Rabbi of Simchat Yisrael Messianic Synagogue in West Haven, CT, I write regularly for several publications and speak widely in congregations and conferences. My wife is a Southern-fried Jewish Beltway bandit and a smokin' hot human rights attorney... and please don’t take offense if I dump Tabasco sauce on your cooking.
View all posts by Rabbi Joshua →
This entry was posted in Uncategorized and tagged Jewish Believers, Jewish life, Messianic Judaism, MJRC, rabbi, rabbinics, UMJC. Bookmark the permalink.

2 Responses to Announcing … Another Rabbi!