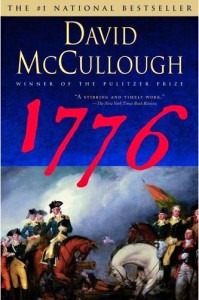 I just finished reading David McCullough’s national best-selling book, 1776 (New York: Simon & Schuster, 2006). Let me just say I could not put it down. Although it is a book of history, it reads more as a novel. McCullough is a master story teller. Through extensive research in archives and libraries both in America and England, McCullough spins a telling of the Revolutionary War in language that is engaging and refreshing, rather than in dry and boring academic language.  McCullough writes as a storyteller would tell the events.

For those already aware of David McCullough this should come as no surprise. He has twice earned the Pulitzer Prize for his books Truman and John Adams, and twice earned the National Book Award. He has become famous for his ability to draw people into American history.

I have always loved history. However, I rarely read books on more modern history. Yet over and over again I kept hearing about how great McCullough’s 1776 is, and in a desire to read something different from what I normally read, I decided to pick up a copy at a used book store. And I am so glad I did.

Many of us might already be aware of the sacrifice required in the establishment of the United States. We may even already know details about some of the figures and events surrounding the war. But McCullough paints an even more real picture. One that is not only engaging, but really impresses the cost of the American Revolution … and the reality that there were a few times where we were very close to almost losing the war and never actually realizing our dream of freedom. McCullough helps you appreciate even more what it means to be an American.

In the conclusion of the book, McCullough writes:

The war was a longer, far more arduous, and more painful struggle than later generations would understand or sufficiently appreciate. By the time it ended, it had taken the lives of an estimated 25,000 Americans, or roughly 1 percent of the population. In percentage of lives lost, it was the most costly war in American history, except for the Civil War.

The year 1776, celebrated as the birth year of the nation and for the signing of the Declaration of Independence, was for those who carried the fight for independence forward a year of all-too-few victories, of sustained suffering, disease, hunger, desertion, cowardice, disillusionment, defeat, terrible discouragement, and fear, as they would never forget, but also of phenomenal courage and bedrock devotion to country, and that, too, they would never forget.

McCullough helps you appreciate the great leadership of the Commander in Chief, General George Washington, and those steadfast officers upon whom he relied, like Generals Nathanael Greene and Henry Knox. He gives you an inside look at those in Congress, as well as those on the side of the British. He also introduces you not only to patriots, but to turncoats, men and women, rich and poor. McCullough spins a tale that must be read. I wish more Americans would actually be required to read it.

If you are looking for a last great book for the Summer, I highly recommend David McCullough’s 1776.

I'm a Rabbi, writer, thinker, mountain biker, father and husband ... not necessarily in that order. According to my wife, however, I'm just a big nerd. I have degrees in dead languages and ancient stuff. I have studied in various Jewish institutions, including an Orthodox yeshiva in Europe. I get in trouble for making friends with perfect strangers, and for standing on chairs to sing during Shabbos dinner. In addition to being the Senior Rabbi of Simchat Yisrael Messianic Synagogue in West Haven, CT, I write regularly for several publications and speak widely in congregations and conferences. My wife is a Southern-fried Jewish Beltway bandit and a smokin' hot human rights attorney... and please don’t take offense if I dump Tabasco sauce on your cooking.
View all posts by Rabbi Joshua →
This entry was posted in Uncategorized and tagged Book Reviews, History. Bookmark the permalink.