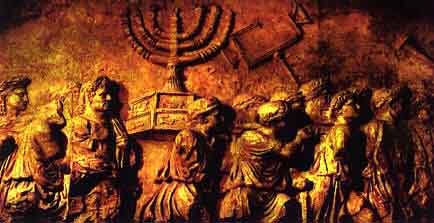 Last Tuesday was the 17th of Tammuz, a minor fast day within the Jewish community. However, due to our Schlep Across America I was not able to blog about it.

The 17th of Tammuz marks the first breech of the walls of Jerusalem by the Romans in 70 CE leading to the violent siege of the city, and its eventual destruction. It also begins the three week period leading up to Tisha B’Av, the day both Temples were destroyed along with many other tragic events within Jewish history.

The 17th of Tammuz is commemorated with a half-day fast (from sun-up to sundown). However, there are no other prohibitions. The following “Three Weeks” are a period of mourning. Many observant Jews will refrain from participating in celebrations, especially weddings. And there are many Jews who will also refrain from shaving, cutting their hair, and will observe other mourning customs.

An interesting note regarding the Minor Fast Days is that there is some debate within halachah as to the observance of these days. An equal argument can be made both for and against fasting on this day (17th of Tammuz). Interestingly, according to many halachic authorities, either choice is actually following “the letter of the law” since there are differing opinions.

The central issue is whether or not we are living in a time where “there is no persecution but not yet peace.” This discussion is exemplified from the following Talmudic text:

However, ALL authorities are in agreement that this machloket (halachic disagreement) does NOT extend to major fast days, like Tisha B’Av or Yom Kippur. These major fast days are still obligated upon all Jews, unless they are exempt for medical reasons (and as always, minor children are always exempt).

Whether one chooses to fast on minor fast days or not, what is important is to keep in mind the tragic history of our people. And yet, although there has been an increase in anti-Semitism in recent years, we are still not “universally persecuted.” Many of us live in complete freedom without having to worry on a daily basis about pogroms, being lynched, or barred from a local country club. But we are also not yet living in complete peace.

As such, during these “Three Weeks,” we must still identify with the sufferings of our past, while at the same time long for the days of Mashiach.

May that day come speedily and soon!

I'm a Rabbi, writer, thinker, mountain biker, father and husband ... not necessarily in that order. According to my wife, however, I'm just a big nerd. I have degrees in dead languages and ancient stuff. I have studied in various Jewish institutions, including an Orthodox yeshiva in Europe. I get in trouble for making friends with perfect strangers, and for standing on chairs to sing during Shabbos dinner. In addition to being the Senior Rabbi of Simchat Yisrael Messianic Synagogue in West Haven, CT, I write regularly for several publications and speak widely in congregations and conferences. My wife is a Southern-fried Jewish Beltway bandit and a smokin' hot human rights attorney... and please don’t take offense if I dump Tabasco sauce on your cooking.
View all posts by Rabbi Joshua →
This entry was posted in Uncategorized and tagged Fast Days, Halachah, Holidays. Bookmark the permalink.

4 Responses to The Three Weeks