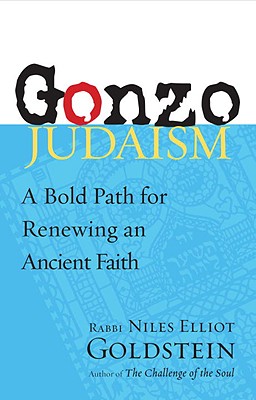 Rabbi Niles Elliot Goldstein is a nationally recognized author and speaker, as well as the founder and Rabbi Emeritus of The New Shul in New York City. He is known for his “gonzo” approach to Jewish life and his efforts at forging a new direction for Judaism in the future.

With a title like “Gonzo Judaism” I decided to pick-up the book at a recent going-out-of-business sale at Border’s.  The book is a clarion call for a new Jewish agenda and a blueprint for an adventurous but genuine path toward spiritual growth and religious wisdom. The author contends that “most Jewish institutions are out of touch with modern Jews.” Therefore, Goldstein encourages his readers to take a fresh look at contemporary Jewish life. What Judaism needs, he argues, is to adopt a “gonzo” approach to Jewish life – the rebellious, risk-taking attitude and to take bold, creative, and forward taking steps to reshape and revitalize contemporary Judaism.

A similar call and approach is what inspires us here at Yinon. So I obviously shared an immediate connection with Goldstein’s clarion call.

The book is a fast read – I finished it in just a few hours. Although I truly resonated with his overall message and found some useful ideas, there were also aspects of the book I just could not connect with. For example, although the author writes with a fervent and clear message, I often could not get over the style he often uses in communicating his points. Just as his message is “gonzo” so is his language. Agreed, the book is a critique of modern institutionalized Judaism. However, he often uses such a disrespectful tone toward the establishment, in my mind, and having experience with this, you can often critique from a respectful and loving position.  Furthermore, I felt his frequent swearing in the book did not help me connect with his approach to Jewish spiritual life. I personally found it an obstacle.

However, it is an excellent book for those who want to get excited about Judaism. If you are already excited about Judaism, you may feel left a little hanging, as I did. Yet, there is some really great stuff here! And it is full of useful suggestions and how-to’s. So I’ll share what I liked the most and comment on a few points (especially some comments he makes toward Messianic Jews).

I’ll approach it chapter by chapter and pull out the nuggets:

The first chapter begins with a critique of the “standard model.” The chapter opens with him speaking at a stuffy, overly formal, and very large Reform synagogue. Having just returned from a trip to Central Asia, Goldstein chose to talk about something that would push the envelope a little for this staunchy crowd and hopefully motivate them spiritually – he decided to introduce them to a little Jewish mysticism.  Let’s just say it did not go over so well. And afterward the older Senior Rabbi made sure to “critique” him and his message.

This experience leads into his critique of what is wrong with Judaism today. “Jews have been voting with their feet,” writes Goldstein,” and those feet have been walking in places other than the isles of synagogues … only 46 percent of the 5.2 million Jews in America belong to congregations. That percentage is by all accounts dramatically lower for those under the age of thirty-five, a crucial demographic that the NJPS (National Jewish Population Survey) didn’t even bother to poll (p.6).”

Goldstein contends, “We need ‘hybrid’ models of Jewish life, models that allow for the healthy coexistence and creative interplay of intellect and emotion. And by emotion I’m not talking about superficial, vapid exuberance, but authentic, real feeling – deep, complex, and heartful … at its best, religion is not only accessible, but a force  (p.8).”

To all of this I say “AMEN!”  Goldstein demonstrates how we can feel free to draw upon not only the wealth of Jewish spirituality today, but feel free to dig into lost of ancient rituals of the past. He also gives some helpful suggestions by giving examples of things he has introduces into his own communities. One example is the Chasidic tisch. Although tisch in Yiddish means “table,” the term is used to describe a spiritual gathering of Chasidim around a large table to drink, eat, sing, and share words of Torah. Goldstein argues that you do not have to be Chasidic to allow this Jewish practice to be a part of your community. He has incorporated a model of a tisch into his own community – and has used the time to open it up to all members (men and women) to enjoy an evening together. He writes, “All you need is a group of friends, a knowledgeable leader, and a chilled bottle of vodka.”

Another practice Goldstein discusses is adopting the Breslover Chasidic practice of Hitbodedut.  Because I have blogged on this a few times before, you can click HERE for more on what this is.

All of these different practices, Goldstein contends, help get Jews out of the pews and toe-to-toe with G-d (p.12). Goldstein writes, “Judaism can and often should be taken out of the sanctuary and into the home, the streets, the public square. Judaism needs to meet us where we are – and most of us aren’t in synagogue very often (p.16).”

Some other ideas he gives in the first chapter include “Spirits and Spirituality” – adult education sessions done at a hip downtown bar with such topics as Mussar & Mojitos. Another idea is a group called Tribeca Hebrew which held several events that paired different wines with different aspects of Judaism.

Although these ideas might challenge the status quo, they help reach those who currently do not attend synagogue.  And it is not just a veneer to make Judaism “cool.” It is making it relevant to today’s Jews who live and work in the real world outside the walls of a sanctuary.

Goldstein explains that what we need is “In-your-face audacity … Merging head and heart. These have been some of the guiding principles of the new Judaism that many Jews, especially the younger generation of Jewish leaders have been following in our ongoing quest to find – or construct – a revitalized faith … Our Judaism, if it is to be dynamic and profound, needs to transport us (p.17-18).”

Update: Parts II & III of this review can be found HERE and HERE.

I'm a Rabbi, writer, thinker, mountain biker, father and husband ... not necessarily in that order. According to my wife, however, I'm just a big nerd. I have degrees in dead languages and ancient stuff. I have studied in various Jewish institutions, including an Orthodox yeshiva in Europe. I get in trouble for making friends with perfect strangers, and for standing on chairs to sing during Shabbos dinner. In addition to being the Senior Rabbi of Simchat Yisrael Messianic Synagogue in West Haven, CT, I write regularly for several publications and speak widely in congregations and conferences. My wife is a Southern-fried Jewish Beltway bandit and a smokin' hot human rights attorney... and please don’t take offense if I dump Tabasco sauce on your cooking.
View all posts by Rabbi Joshua →
This entry was posted in Uncategorized and tagged Book Reviews, Jewish life, nexgen, practical suggestions, Spirituality, Synagogue. Bookmark the permalink.