Shmuley Boteach and a Judaism for Non-Jews 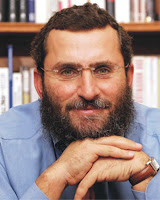 There has been some interesting buzz across the web regarding an article by Rabbi Shmuley Boteach that appeared yesterday in the Jerusalem Post.


My friend and colleague, Derek Leman, has already beaten me in responding to the article, but his response particularly deals with the figure of Yeshua. I want to rather focus on Rabbi Shmuley’s concept of a more global and open form of Judaism.

According to Rabbi Boteach:

“Judaism for Jews is too narrow, too particular to really inspire. The vast majority of the world’s Jews want to live mainstream and fully integrated lives. But every form of Jewish outreach – from Reform to Orthodox – is designed to bring them back to the Jewish community. News alert. They left 200 years ago during the great emancipation and they aren’t coming back.

There is, therefore, only one solution: Judaism for non-Jews. A global movement to disseminate Jewish values and spirituality to all Earth’s inhabitants, making no distinction between Jew and gentile.”

Rabbi Shmuley is hardly the first person to advocate for a more welcoming and global form of Judaism. This has been proposed by Reform, Reconstructionist, and Renewal movements; as well as the B’nai Noach Movement and even the Kabbalah Center. And of course … this has been the similar position of Messianic Judaism.

Just to clarify, Rabbi Shmuley (and the other Jewish movements) are not advocating that all distinctions be removed, but rather that the rich legacy and teachings of Judaism should be more readily shared with the world. Our services should be more welcoming, spiritual, and user friendly; and a greater level of participation granted to intermarried couples and non-Jews.

I am one such person who shares this position. Especially as a follower of our Messiah, Yeshua, I feel there is a Messianic mandate to include those from the Nations. The question is what will this look like? How do you share the universal message of HaShem with the world, while at the same time affirm the unique covenantal role of the Jewish people? Afterall, Messianic Judaism, for example, is supposed to be a JEWISH movement for Yeshua within both the wider Jewish community and Ecclesia.

It is true that the current wave of non-Jews drawn to Torah and the Jewish roots of their faith is a move of HaShem. Yet, there is a just as significant role in Jews coming to faith in the Jewish Messiah, and in many circumstances, re-embracing Jewish life and covenantal responsibility (which is different for Jews and non-Jews).

In every aspect of life, balance is always key. So what does that look like for a more open and tolerant form of Judaism? Although in many respects I agree with Rabbi Shmuley in this regard, I am not sure I necessarily agree with his action points.

In his recent article (and in a forthcoming book) Boteach advocates a global campaign for a seven-step program of living:

1. Observe Friday night as family night by tuning out all electronic interference and focusing on children, friends and community.

2. Eat kosher food (20 percent of Americans already look for kosher symbols for cleanliness and purity) and separate milk from meat as a symbol of the affirmation of life and its negation from all forms of corrosion and death.

3. Celebrate the themes of the Jewish festivals …

6. Appreciation of, and respect for, the feminine, including codes of alluring modesty for women …

7. A commitment to acts of communal kindness, such as regular visits to hospitals and homes for the elderly and giving 10 percent of one’s income to charity.

Although I am not sure the above seven steps are indeed THE STEPS, I do agree that these recommendations could certainly bring added meaning and a deeper spirituality into our world. Judaism indeed has much to offer. However, the struggle is that Judaism cannot escape this continually percolating tension between universality and exclusivity. We as Jews are to be both an Or L’Goyim (a Light to the Nations) AND an Am Segulah, a unique and set-apart people. There are so many mitzvot given within the Torah for the specific purpose of keeping us different. And when these distinctions are entirely removed, history continually demonstrates that it always leads to the assimilation (and disappearance) of the Jewish people (also a problem).

I think there is an answer. However, we know from experience that neither removing all distinctions nor keeping ourselves isolated from the rest of the world works. We MUST for the sake of ourselves and the benefit of the world try to find a healthy balance between the age-old tension of universality and exclusivity. We MUST find a way to have open and welcoming communities that at the same time affirm the unique covenantal role of the Jewish people. This is especially true in a day and age when the make-up within the Jewish community itself is more complex and diverse as never before. A feat not as easy as one would think. There is no silver bullet. However, for the sake of the future it must be done. This is both our prophetic and necessary task.

I'm a Rabbi, writer, thinker, mountain biker, father and husband ... not necessarily in that order. According to my wife, however, I'm just a big nerd. I have degrees in dead languages and ancient stuff. I have studied in various Jewish institutions, including an Orthodox yeshiva in Europe. I get in trouble for making friends with perfect strangers, and for standing on chairs to sing during Shabbos dinner. In addition to being the Senior Rabbi of Simchat Yisrael Messianic Synagogue in West Haven, CT, I write regularly for several publications and speak widely in congregations and conferences. My wife is a Southern-fried Jewish Beltway bandit and a smokin' hot human rights attorney... and please don’t take offense if I dump Tabasco sauce on your cooking.
View all posts by Rabbi Joshua →
This entry was posted in Uncategorized and tagged community, Finding a Spiritual Home, Jews in the News, Messianic Judaism, nexgen, Spirituality. Bookmark the permalink.

4 Responses to Shmuley Boteach and a Judaism for Non-Jews