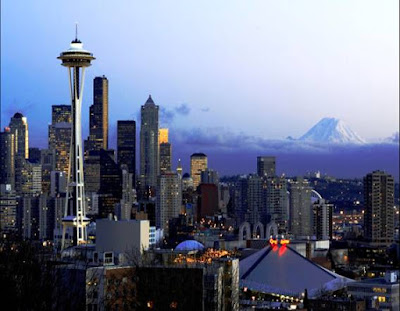 I just returned home from an exciting week at the 2010 UMJC Conference held this year in beautiful Seattle, WA.

I arrived last Monday (July 26th) for the UMJC Delegate meetings held on Tuesday and Wednesday. Some great discussions and details came out of these meetings, including delegate affirmation of my new position with the UMJC as the Young Adult Liaison – working with all programming aimed at the next generation, and recruiting young people for congregational leadership.
Since the conference was held in Seattle, there were a number of “Seattle-esque” influences on the theme and details. For example, many of the musicians featured were from the Northwest, much of the music was “un-plugged,” and the level of formality was very casual, with many people showing up to the evening services in shorts.
The classes this year were also very original and creative. Many of them were panel type classes, or team taught.
The Shabbat service was led by Seattle congregation, Beit HaShofar, and was traditional – with a NW twist! The Siddurim for the service were donated by FFOZ, and contained just the Shabbat morning section of a Siddur they have been working on for some time.
On Shabbos afternoon I led a really great Torah study that was very interactive and inspiring. I love both teaching and learning, and environments like this study allow me to not only facilitate discussion of the text(s) but also hear other great insights from fellow colleagues and attendees.
My Personal Experience
For me personally, the UMJC conference was a definite success for a number of reasons:
1) Connections and Friendships
In addition to catching-up with long time friends, during this particular conference I was able to connect with some really amazing people who I either did not previously know, or who I only knew in passing. I was also able to reconnect with some friends I have not seen in several years.
2) Professionally
Two great things happened personally for me at the conference, my full s’micha – rabbinic ordination (previously I was licensed and installed as a congregational rabbi, but this was my full ordination which opens up even more doors). And as I mentioned earlier, I was also confirmed by the delegates in my new part-time position with the UMJC.
My s’micha has been a process that began in 1997, and which has been a long journey. So to receive my full s’micha was (and is) very exciting. My parents, grandmother, and a number of the people who have stood with me since the beginning of this journey were able to be there in support.
3) Kehilah 2020 Project (K20)
This year at the delegate meetings, the K20 Committee (under the new guidance of committee chair, Rabbi Tony Eaton) was unveiled and affirmed. The K20 Project is a response to the dire need to raise up new leaders.
K20 is a comprehensive ten-year plan to establish, strengthen, and multiply congregations that welcome Messiah home in the midst of the Jewish community. K20 focuses on identifying, recruiting, and helping to equip leaders, and placing them in new or renewed congregations that will serve the Messianic Jewish community of the future. I’ll be working closely with this project in my position with the UMJC and am very excited about its potential.
4) Union of Messianic Believers (UMB)
During the conference, I attended a small planning meeting to reorganize and relaunch the UMB. The Union of Messianic Believers is the individual membership arm of the UMJC. Although it has existed for some time, and has done some great things, the UMB is in a re-organization stage and plans to relaunch a new strategy, website, etc. This will expand the work of the UMJC to reach not only individuals, but reach out to congregations and ministries which may not necessarily fall-into the label “Messianic Jewish,” but who wish to still connect to the larger Messianic Jewish movement.
At this meeting a new executive committee was formed with the previous President (Rabbi Dr. John Fischer) and Vice-President (Dr. H. Bruce Stokes). I was named one of the new members to the Executive Committee, along with outgoing UMJC Twenties Chair, Julie D. We are excited about the exciting developments within the UMB and opportunities on the horizon. So stay tuned – I’ll be giving an update soon.
Conclusion
The UMJC is an organization that is moving forward. It is harnessing its strengths to move forward, and learning from the past. I am honored to be a part of an organization that is leading the way in many respects within the Messianic Jewish Movement. For example, the UMJC is leading the way in raising up young leaders, empowering young people in leadership, and preparing for the future of our congregations.
You have definitely not heard the last from the UMJC … See you at next year’s conference!

I'm a Rabbi, writer, thinker, mountain biker, father and husband ... not necessarily in that order. According to my wife, however, I'm just a big nerd. I have degrees in dead languages and ancient stuff. I have studied in various Jewish institutions, including an Orthodox yeshiva in Europe. I get in trouble for making friends with perfect strangers, and for standing on chairs to sing during Shabbos dinner. In addition to being the Senior Rabbi of Simchat Yisrael Messianic Synagogue in West Haven, CT, I write regularly for several publications and speak widely in congregations and conferences. My wife is a Southern-fried Jewish Beltway bandit and a smokin' hot human rights attorney... and please don’t take offense if I dump Tabasco sauce on your cooking.
View all posts by Rabbi Joshua →
This entry was posted in Uncategorized and tagged community, nexgen, UMB, UMJC. Bookmark the permalink.