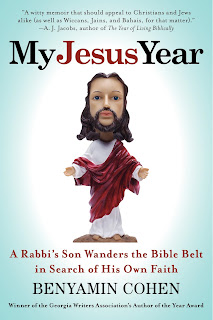 Last week I finished reading My Jesus Year, by Benyamin Cohen (Harper Collins, 2008). The book is a hilarious recounting of an Orthodox Rabbi’s son who spends a year wandering the Bible Belt in search of his own faith.

I would highly recommend this book to anyone looking for some light and fun Summer reading, but especially for congregational leaders. Although Benyamin Cohen spends a year visiting churches, the book provides an excellent glimpse into what it is like to be a visitor, and forces introspection about the way we portray our communities to others. Throughout the book Cohen shares important insights and ideas from various types of communities that he thinks could actually benefit the Jewish Community, recognizing that each of our faiths have much we can learn from one another.

Fellow blogger and friend, Yahnatan Lasko, his wife, and I recently heard Benyamin Cohen talk about his book at our local JCC. His quick wit, his shared insights gained from the experience, and his humor all led me to read the book. And I am glad I did!

As the son of an Orthodox Rabbi, and raised within the Jewish community of Atlanta, Benyamin Cohen spent a year trying to rediscover his own Jewish Spirituality. But what is interesting, is that he decided to pursue this search in what would seem to many Jews the most unlikely of places – Christian churches in the Bible Belt. However, as a practicing Jew, he had to get a special rabbinic dispensation for his quest. And although he did receive it from one particular rabbi, it was not without some certain parameters on his participation.

It is interesting that Benyamin was not visiting churches to necessarily “find Jesus.” In his mind, with many American Churches being vibrant spiritual centers, attracting masses of people on a weekly basis, they had to be doing something right.

Cohen contrasts this to the state of much of the Jewish Community today, noting:

“Synagogue attendance is flagging; for that matter, Judaism as a whole is struggling just to keep its followers interested. Studies indicate that Jewish philanthropists in this country spend more money on what’s called ‘inreach’ than on any other cause – including that catchall cause, support for Israel. Fueling all of this is an alarming fact: 50 percent of Jews in America are now intermarrying into other faiths. The Jewish community in America is hemorrhaging; we’re a dying breed (Cohen, 28).”

So what is Cohen’s personal answer?

“As crazy as it sounds, I’m looking to Jesus to make me a better Jew. I want to reconnect to my Judaism (Cohen, 28).”

With my own theological ideas on that comment aside for the moment, Cohen is on to something. Cohen is not the first individual within the Jewish community to recognize that there is much to learn from contemporary Christianity. Synagogue 3000 is just one example of a Jewish think-tank that has sought out figures such as mega-pastor Rick Warren for assistance in recreating vibrant Jewish communities. As Cohen puts it, “People are basically tired of sitting in synagogue and having no connection to G-d when everyone else is. People are waking up (Cohen, 169).”

Many churches do a great job at marketing their communities, empowering their members, and creating vibrant worshipful atmospheres that are spiritually moving for their congregants. For the most part – they are simply doing a much better job at reaching people.

I of course recognize that there is also much the Church can learn from the Jewish Community. But I believe, like Cohen and many others, that there is much to be learned on both sides. My Jesus Year is a helpful look into our communities and what newcomers experience when they visit. It should force us to think much more critically about our services, our visions for our communities, and how to make ourselves more welcoming to those who are searching.

My Jesus Year is a quick and light-hearted read – perfect for relaxing by the pool, sitting on an airplane, or on vacation. An ideal book for the Summer – and educational to boot!

I'm a Rabbi, writer, thinker, mountain biker, father and husband ... not necessarily in that order. According to my wife, however, I'm just a big nerd. I have degrees in dead languages and ancient stuff. I have studied in various Jewish institutions, including an Orthodox yeshiva in Europe. I get in trouble for making friends with perfect strangers, and for standing on chairs to sing during Shabbos dinner. In addition to being the Senior Rabbi of Simchat Yisrael Messianic Synagogue in West Haven, CT, I write regularly for several publications and speak widely in congregations and conferences. My wife is a Southern-fried Jewish Beltway bandit and a smokin' hot human rights attorney... and please don’t take offense if I dump Tabasco sauce on your cooking.
View all posts by Rabbi Joshua →
This entry was posted in Uncategorized and tagged Book Reviews, community, Jewish life, practical suggestions, Spirituality. Bookmark the permalink.

3 Responses to My Jesus Year