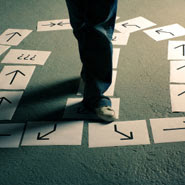 This week I was thinking about the familiar story of Yeshua’s encounter with the rich young ruler (Mathew 19:16-30). In the story, the rich young man asks Yeshua about what more he must do in order to obtain eternal life. Truth be told, I always found this story a little puzzling. Originally I was under the impression, as is commonly taught, that this passage was speaking against being wealthy, and having many possessions. Although this interpretation could be plausible, over time I have also come to see something different.

I have found a nuance of something much deeper and related to our relationships with others rather than an abrogation of being wealthy. I came to this conclusion by asking the not so seemingly apparent question: If the wealthy young man was already observing the mitzvot, why did Yeshua tell him that the only way to obtain eternal life was to sell all of his possessions? For nothing in the Scriptures seems to allude to wealth and possessions as being equal to not being able to obtain eternal life.

Yeshua’s original response to the young man was simply, “If you want to obtain eternal life, observe the mitzvot (19:17b).” He than continued by citing five of the Ten Commandments, and the commandment to “Love your neighbor as yourself (Lev. 19:18 & Mark 12:31).” The young man stated that he had done those mitzvot, and wanted to know what more he needed to do.

I believe Yeshua’s response was posited to question the young man’s assuredness. The reason is because all the mitzvot cited by Yeshua fall into the category of “ben adam l’chavero,” mitzvot dealing with one’s relationship toward others, and putting others’ needs before your own. When Yeshua asked the young man if he was truly doing so, the young man was too quick to respond.

Being wealthy can put you in a difficult position. As it often forces you to put your own needs before others. With great wealth comes great responsibilities, and often those responsibilities cloud our judgment to see our priorities clearly.

Each one of us may not be financially wealthy, but we each have gifts and talents that can possibly cloud our judgment as well. We can often feel like we are doing everything for G-d already, and when we ask what more G-d wants from us, we are often shocked by His response. We all feel there are things we cannot possibly give up because they are our tools which we use to serve Him. But what G-d really wants is our entire neshama, our entire self. We may be leaders, teachers, musicians, speakers, and artisans. And what G-d wants to know is, if asked to do so, would we be willing to trust Him with our gifts? Would we be willing to give those gifts and talents up for Him?

I am not saying that G-d expects you to give up your talents and gifts, as we are entrusted with those gifts to prepare the way for the coming of Mashiach. However, like the rich young ruler, G-d does often test our faith to determine which we trust more – our own abilities, or upon HaShem. We are all “wealthy.” As such, would we truly be willing to give it all up in order to follow Him? I pray that we would. For by being obedient in doing so, Yeshua assured us, “We will find our rewards in heaven (19:21).”

I'm a Rabbi, writer, thinker, mountain biker, father and husband ... not necessarily in that order. According to my wife, however, I'm just a big nerd. I have degrees in dead languages and ancient stuff. I have studied in various Jewish institutions, including an Orthodox yeshiva in Europe. I get in trouble for making friends with perfect strangers, and for standing on chairs to sing during Shabbos dinner. In addition to being the Senior Rabbi of Simchat Yisrael Messianic Synagogue in West Haven, CT, I write regularly for several publications and speak widely in congregations and conferences. My wife is a Southern-fried Jewish Beltway bandit and a smokin' hot human rights attorney... and please don’t take offense if I dump Tabasco sauce on your cooking.
View all posts by Rabbi Joshua →
This entry was posted in Uncategorized and tagged New Testament, Yeshua. Bookmark the permalink.

6 Responses to A Rich Young Ruler