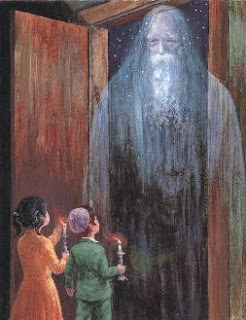 Our Torah portion this week, Parashat Tzav, describes the order for offerings and the process for consecrating Aaron and his sons as priests of Israel. The portion concludes with Moses sprinkling Aaron and his sons with a mixture of blood and oil, and of the requirement to stay within the Tabernacle for seven days – thus completing their consecration before HaShem.

This week is also Shabbat HaGadol, the Great Shabbat that occurs at the beginning of the week in which Passover will be observed (Passover begins Monday evening). There are five special shabbatot leading up to Passover. Each special Shabbat has special readings that are read in addition to the weekly portion. The exception is Shabbat HaGadol. Instead of an additional reading from the Torah, Shabbat HaGadol is highlighted by only a special Haftarah reading from Malachi which concludes with the words:

“Behold, I will send you Elijah the prophet, before the coming of the great and awesome day of HaShem” (Mal. 3:23).

Jewish tradition teaches us that Elijah is a messianic figure who will usher in Mashiach and the Messianic Age. This is purposely fitting at this season because Passover is our reliving and retelling of our redemption from Egypt. Both Jewish tradition and the New Testament portray Elijah as representing the coming of messianic redemption. That is why the figure of Elijah is so connected with Passover. Passover today commemorates our connection with not only our physical redemption from slavery, but our spiritual redemption as well.

The Besorah of Luke associates the personification of Elijah with John the Immerser:

“And it is he who will go as a forerunner before Him in the spirit and power of Elijah, to turn the hearts of the fathers back to the children, and the disobedient to the attitude of the righteous; so as to make ready a people prepared for the L-rd” (Luke 1:17).

So John the Immerser was a fulfillment of this week’s special Haftarah reading from Malachi 3:23 in preparation for the incarnation and revelation of Yeshua the Messiah. Yet, the role of Elijah is still not complete, for there is an expectation that Elijah himself will yet return ahead of our glorious Mashiach. This is the reason Elijah is referenced so often in Jewish tradition, especially during Passover. During the Seder there is a whole place setting (or in some homes, simply a cup) that is specifically set aside. It is left untouched in the messianic hope that each year we will open the door during our Passover festivities, and welcome in Elijah, who will in turn usher in the return of our Messiah.

This Shabbat we recall the consecration of Aaron and his sons as priests before G-d. We will also read about the return of Elijah who will usher in an even greater consecration and priesthood. Next week during the Seder, we will proclaim, “Eliyahu HaNavi … Come quickly and speedily with Messiah the Son of David.”

As we sing those words this Passover, let us also remember the words associated with Shabbat HaGadol – “Behold, I will send you Elijah the prophet, before the coming of the great and awesome day of the HaShem.” May we all merit the return of Mashiach and see that day fulfilled speedily and soon!

I'm a Rabbi, writer, thinker, mountain biker, father and husband ... not necessarily in that order. According to my wife, however, I'm just a big nerd. I have degrees in dead languages and ancient stuff. I have studied in various Jewish institutions, including an Orthodox yeshiva in Europe. I get in trouble for making friends with perfect strangers, and for standing on chairs to sing during Shabbos dinner. In addition to being the Senior Rabbi of Simchat Yisrael Messianic Synagogue in West Haven, CT, I write regularly for several publications and speak widely in congregations and conferences. My wife is a Southern-fried Jewish Beltway bandit and a smokin' hot human rights attorney... and please don’t take offense if I dump Tabasco sauce on your cooking.
View all posts by Rabbi Joshua →
This entry was posted in Uncategorized and tagged Passover, Pieces of Parasha, torah. Bookmark the permalink.