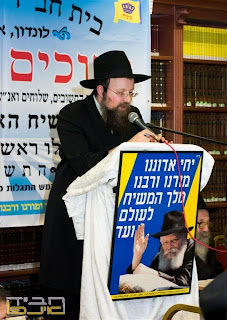 We have much to thank Chabad for – particularly for their work spreading Yiddishkeit around the world, and for bringing fellow Jews back to Torah. I too have much to thank Chabad for personally, for their role in my own spiritual journey. However, most of all, I think we owe Chabad a bit of gratitude for bringing the issues of Mashiach front and center in the Jewish community.

This is particularly true in regard to Chabad Messianism. Many people outside of Chabad circles have assumed that much of the messianic fervor within Chabad has all but fizzled out. However, in a recent blog post, I pointed out that Chabad Messianism is alive and well.

Chabad continues to raise awareness to messianic ideas within Judaism that have mostly been brushed aside and “hidden under the rug,” if you will. Ideas like a resurrected Messiah, incarnation, and miracles. Messianic thought that appears in Jewish history and texts, but have been weeded out due to their sounding too much like “that other guy” (i.e. Yeshua).

I really encourage you to listen to the radio show. Aside from an annoying Christian guy who called in and probably did more harm than good, the show gives an interesting perspective into Chabad messianic understanding. And, interestingly, the weak responses against some of the ideas Chabad messianists put forth.

Aside from the comments made by the Chabad rabbi, one of the most controversial points in the radio show is when a couple Chabad messianist women called in and repeated over and over again that the Rebbe did not pass away, that he is at this very moment the messiah, and those who do not believe in him will be damned.

Shmarya Rosenberg, at Failed Messiah points out; during one of these calls, the radio host, Zev Brenner, asked one of these women, “Did the Rebbe die?”

She responded, “G-d forbid. The Rebbe is atzmus me’elokus [the very essence of G-d] in a guf [body]. He cannot die.”

“Where is the Rebbe right now?,” Zev Brenner asked.

Shmarya Rosenberg, who is a former Chabadnik, emphasizes that what Zev Brenner heard represents normative Chabad messianist theology. The idea that the Rebbe, no longer confined to his body, is everywhere. That he is omnipresent and almost, but not quite, omnipotent, as well. He answers your prayers and intercedes for you on high, and watches over you.

I would like to again point out, that one of these callers claimed that the Rebbe is “the very essence of G-d in a body”! A claim that over and over again the wider Jewish community has declared “NOT JEWISH.” And yet, it truly is. Those of us who understand these ideas recognize points of legitimacy to these claims. We would only disagree on the “who.”

Anyway, and interesting discussion indeed. What do you think?

I'm a Rabbi, writer, thinker, mountain biker, father and husband ... not necessarily in that order. According to my wife, however, I'm just a big nerd. I have degrees in dead languages and ancient stuff. I have studied in various Jewish institutions, including an Orthodox yeshiva in Europe. I get in trouble for making friends with perfect strangers, and for standing on chairs to sing during Shabbos dinner. In addition to being the Senior Rabbi of Simchat Yisrael Messianic Synagogue in West Haven, CT, I write regularly for several publications and speak widely in congregations and conferences. My wife is a Southern-fried Jewish Beltway bandit and a smokin' hot human rights attorney... and please don’t take offense if I dump Tabasco sauce on your cooking.
View all posts by Rabbi Joshua →
This entry was posted in Uncategorized and tagged Apologetics, Chabad, Jews in the News, mashiach, Messiah, Messianism. Bookmark the permalink.

6 Responses to Thank You, Chabad