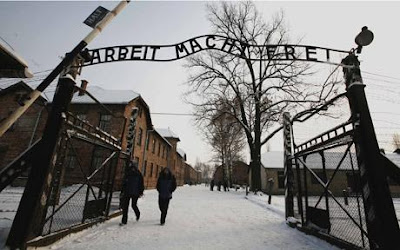 Last Friday, the famous sign above the gates of Auschwitz which reads “Arbeit Macht Frei” (Work Sets You Free) was stolen in the middle of the night. Although a temporary replica was immediately put up in its place, the act sent shock waves throughout the Jewish world … at least among those who were listening.

The sign was recovered (Thank G-d) on Monday (albeit in three pieces), and five young men have been detained in the incident. Although the incident enraged many Holocaust survivors – most people don’t even know it happened. Maybe it’s just me, but it seems hardly a word was spoken about it.
Additionally, last Monday, December 14th, an Orthodox Christian priest in Moldova led nearly one hundred people in attacking a public menorah. The priest, Anatoliy Chirbik, led the group in a demonstration at Stephan the Great Square in Kishinev, where he spewed a number of antisemitic slurs. Demonstrators, led by the priest, used hammers and iron bars to dismantle the five foot tall menorah, and erected a huge cross in its place.

“We are an Orthodox country,” Chirbik told the assembly. “Stephan the Great defended our country from all kinds of Zjids [a derogatory term for Jews], and now they come and put their menorah here. This is anarchy.”

Ironically, both of these events happened during Hanukkah, a holiday which celebrates our deliverance from tyranny and oppression. 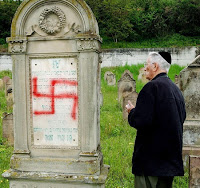 What makes these acts even more disturbing is that they follow on the heels of a troubling year for the Jewish people. 2009 witnessed the most dramatic upsurge in antisemitic incidents and anti-Israel sentiment since the Second World War.
In February, the Anti-Defamation League (ADL) released the findings of a report which found that nearly half of all Europeans feel Jews “have too much power,” and nearly 31% blamed the Jewish people for the current economic crisis.
Incidents in France, which has the largest Jewish population of any European country, reported over 600 new antisemitic incidents just within the last year.
In June I blogged about rising antisemitism in Hungary, which has the third largest Jewish population in Europe. A newsletter published by “The trade union of Hungarian police officers prepared for action,” was quoted in Haaretz as contending for an armed war against the Jews:

“Given our current situation, anti-Semitism is not just our right, but it is the duty of every Hungarian homeland lover, and we must prepare for armed battle against the Jews.”

I can personally attest to the fact that antisemitism is alive and well in Europe. When I first moved to Budapest, Hungary in 2001 I was cautioned to avoid wearing a Star of David, a yarmulke, or any other Jewish symbols. Many people refrain from openly identifying themselves as being Jewish out of fear. When I rented my first apartment, my Jewish landlords were very nervous about my putting up a mezuzah, fearing their property would be vandalized. And I quickly learned my lesson when a swastika was painted outside my apartment window. These sentiments are echoed from within the government and media. The local news channels in Hungary were government run, and often news anchors would openly proclaim that Jews and Gypsies were to blame for the country’s problems.
And the problem is not just in Europe. This does not include the numerous acts which have occurred all over the world.
According to the Anti-Defamation League, Antisemitic acts here in America rose 27% in 2004. Recent data from 2009 show even greater trends, but more finalized results have not yet been released. One of the highest increases in Antisemitic acts, according to a source from the ADL, has been in California, a state that has previously been known to be a melting pot and quite tolerant of minorities. Alas … even in America, we are not immune to rising antisemitism.
Has 2009 been good for the Jewish people? I’ll let you decide. But as for me, I find the trends quite disturbing.

I'm a Rabbi, writer, thinker, mountain biker, father and husband ... not necessarily in that order. According to my wife, however, I'm just a big nerd. I have degrees in dead languages and ancient stuff. I have studied in various Jewish institutions, including an Orthodox yeshiva in Europe. I get in trouble for making friends with perfect strangers, and for standing on chairs to sing during Shabbos dinner. In addition to being the Senior Rabbi of Simchat Yisrael Messianic Synagogue in West Haven, CT, I write regularly for several publications and speak widely in congregations and conferences. My wife is a Southern-fried Jewish Beltway bandit and a smokin' hot human rights attorney... and please don’t take offense if I dump Tabasco sauce on your cooking.
View all posts by Rabbi Joshua →
This entry was posted in Uncategorized and tagged Antisemitism, holocaust, Jews in the News. Bookmark the permalink.