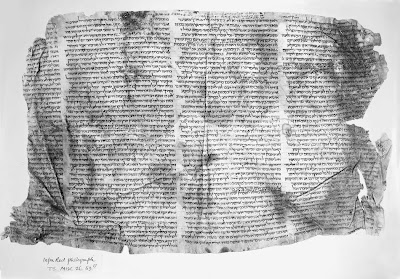 Scroll of tractate Hullin, Babylonian Talmud (CUL T–S MISC. 26.53.17), acknowledgment to Dr. S.C. Reif, Director of the Taylor-Schechter Genizah Research Unit at the Cambridge University Library, and the Syndics of the Library.

Did you know the Talmud was once studied in scroll form?

This morning I ran across an interesting article on Tzvee’s Talmudic Blog titled, ‘Was the Hullin Scroll the Oldest Talmudic Manuscript ever Recovered?’ For those of us familiar with a page of Talmud, and who may have also sat for hours in a yeshiva learning, discussing, and arguing over a daf (a page of Talmud), it seems hard to imagine that the Talmud was not always in a book form.
The manuscript (pictured above) is of a section of the Talmud called Hullin, and is the oldest manuscript of the Talmud ever recovered. Touching on the evolution of the Talmud, the author quotes Professor Shamma Friedman of JTS, in noting:

“For an ensuing period of more than half a millennium the ‘book’ of the Talmud, in the form of manuscript codices, held sway in Jewish intellectual life. These codices usually contained the Talmud text only. The text remained a living and changing entity, in the sense that the margins provided space for textual notes (beyond what may have been possible on scrolls), which were often incorporated in the next copy. Related literature, such as Rashi’s commentary and Tosafot, so central to the printed Talmud as we know it, were essentially available in separate codices only.”

It is interesting to think about how the Talmud has evolved over 1,500 years. What makes the Talmud so fascinating (and difficult) is its complexity. It is in all reality an archaic conversation. I use the word ‘archaic’ not in a sense of ‘useless,’ or ‘done away with,’ but simply in a sense of its age. And because it does not flow like a typical book, it takes mastery of the text to follow and track all its allusions, quotes, and citations – as well as its language. Another aspect of the Talmud many western thinkers find frustrating is that many of the arguments discussed often do not have a conclusion. That is hard for those of us from western countries who have been encultured to expect a neat and organized conclusion.
The Talmud is really just volumes of case law, setting prior precedents for understanding, interpreting, and establishing halachah. Attorneys, and those familiar with legal codes really get this. One of the major aspects that separates Judaism from other faith traditions like Protestant Christianity is this notion of halachah (of Jewish law). Jewish life and practice is established on prior communal precedent. One cannot just do what one sees fit. There are accepted previous understandings and interpretations that determine Jewish life and observance. And proper innovation and creativity should be established based on communal understanding of these prior precedents.
In a previous post I wrote on halachah, I noted that Jewish law was never meant to be static, but rather to be reinterpreted in every generation. Rabbi Wayne Dosick describes halachah as “ever-developing” and “ever-evolving.” Because halachah is derived out of evolving case law, it is developed by wrestling with texts, the practicalities of daily life, and the teachings of previous leaders in order to decide halachic matters. It is a process. A process that is not set in stone, and not without inerrancy. However, while engaging with rabbinic texts and deciding halachah, Professor Gordon Tucker guides,

“Development in the domain of de-rabbanan must not be abrupt or discontinuous, [but] must be rooted in traditional exegetical methodologies, and above all, must be ratified by the community of the committed and informed.”

We as Messianic Jews are obligated to engage in knowledgeable discussion with Jewish law. At times we may interpret it differently, especially in light of New Testament understandings (stay tuned!). Yet, that does not mean we can just “do as we see fit.” We have a responsibility to ourselves and the larger Jewish world to engage in halachah through a knowledgeable and informed process.
And what is the subject matter of the above Hullin manuscript? The author closes his article by noting, “for those who are curious, this text’s subject matters are the prohibitions of eating: the sinew of the hip of an animal; a limb from a living animal; milk together with meat.”

I'm a Rabbi, writer, thinker, mountain biker, father and husband ... not necessarily in that order. According to my wife, however, I'm just a big nerd. I have degrees in dead languages and ancient stuff. I have studied in various Jewish institutions, including an Orthodox yeshiva in Europe. I get in trouble for making friends with perfect strangers, and for standing on chairs to sing during Shabbos dinner. In addition to being the Senior Rabbi of Simchat Yisrael Messianic Synagogue in West Haven, CT, I write regularly for several publications and speak widely in congregations and conferences. My wife is a Southern-fried Jewish Beltway bandit and a smokin' hot human rights attorney... and please don’t take offense if I dump Tabasco sauce on your cooking.
View all posts by Rabbi Joshua →
This entry was posted in Uncategorized and tagged Halachah, rabbinics, Talmud. Bookmark the permalink.

2 Responses to A Talmudic Highlight