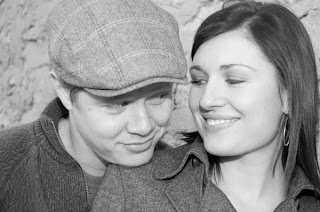 Our friends, Roman and Alaina, are a couple with a big future in music. They recently released a new album, titled “Sounds of Prayer.” Tim Layne at The Emergent Observer calls the album:

Roman formerly played in the delightfully Simon-and-Garfunkley-sounding Meha Shamayim … but in our humble opinion, he’s way more of a rockstar with Alaina by his side. We loved their duo performance at a packed out Stern Center concert (video below) and highly recommend that you fly them out for your future conferences/events/weddings/b’nai mitzvah celebrations. Check them out and buy their new album!
This album is a MUST!!! And it is now also available on iTunes!

(Their song below, “I Believe,” is based primarily on the Rambam’s 12th & 13th articles of faith)

Chocoholic, jazz head ... prone to rants, and a professional pitbull. I married a terrific guy who happens to be a rabbi, so I guess that makes me a rebbetzin. Who saw that one coming? My grandparents survived the Shoah and spent their lives in the service of others. On my best days, I walk in their footsteps.
View all posts by Monique →
This entry was posted in Uncategorized and tagged Jewish Believers, Jewish life, music, Spirituality, Totally Gratuitous. Bookmark the permalink.