A Man of Mystery 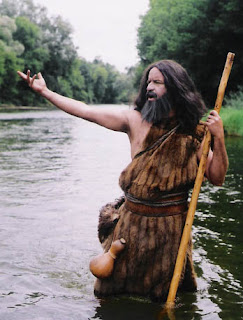 When I was growing up, John the Immerser received very little attention. Of course people talked about him as being important because he was a cousin and forerunner of Yeshua, but otherwise his role was largely reduced to a small mention in the introduction to a much larger narrative.

Mentioned in all four Gospels

However, most people miss the emphasis on this incredible, yet mysterious figure. The Gospel writers place the greatest weight on details they deemed most important to the larger story. All four Gospels emphasize John. You can choose to skip over this fact – as most others do – or you can recognize the significance. Not even Yeshua’s birth narrative is mentioned in all four Gospels (it is only recorded in Matthew and Luke). As such, all four Gospel writers considered John’s narrative as having far more relevance to the larger redemptive story of Yeshua than even Yeshua’s birth.

Think about that for a moment.

So who exactly was John? In addition to being Yeshua’s cousin, he was a cohen – a priest on both sides of his lineage. He was groomed from birth to be a cohen in the Jerusalem Temple. Yet, it seems at some point he was either sent, or vanquished to the desert. Luke records:

The child grew and became strong in spirit, and he was in the wilderness until the day he appeared publicly to Israel (Luke 1:80).

Imagery of John as Elijah

The imagery ascribed to John is also important. He is described as Eliyahu, Elijah, wearing clothing of camel’s hair, a leather belt tied around his waist, eating locusts and wild honey, and proclaiming a message of repentance (compare the imagery of 2 Kings 1:7-8 with Mark 1:6). Luke describes John as coming in the “spirit and power of Eliyahu” (Luke 1:17) in fulfillment of Malachi 3:23-24. Although the real Eliyahu will usher in the second return of Mashiach, John is described as also fulfilling this function.

An important figure in his own right

John was an extremely important figure in his own right. John become well known within Judea, and built up a number of followers. Andew, the brother of Peter, was originally a follower of John before becoming one of the original 12 apostles of Yeshua (John 1:35-41). And the movement he created would outlive him. In fact, John’s message of repentance and immersion spread throughout the known world. A number of years after Yeshua’s death, Paul encountered a man in far away Ephesus (Asia Minor) who was aware only of “the baptism of John” (Acts 18:25 & 19:3), proving how widespread his influence became.

John and the Dead Sea Scrolls

In the desert: preparing the way for the L-rd (Is 40:3 and quoted in DSS, Manual of Discipline).

John’s emphasis on ritual purity, his message of repentance and righteousness, and his prophetic forms of rebuke all echo motifs found in the Dead Sea Scrolls.

Another interesting connection between John and the Dead Sea Scrolls is actually found in an exchange between Yeshua and John. While John is in prison, Matthew 11 records that he sent a message through his talmidim to Yeshua asking, “Are you the one who is to come, or should we look for someone else?” (Mt. 11:3). John is clearly asking, “Are you the Messiah?” And Yeshua responds, saying:

Go and tell John what you are hearing and seeing – ‘The blind see and the lame walk; the lepers are cleansed and the deaf hear; the dead are being raised and the poor hear the Good News.’ (Matthew 11:5 quoting Is. 61:1)

Yeshua responds with a Messianic passage from Isaiah on purpose. Why? Because in Jewish thought, talk is cheap. Yeshua does not respond merely with words, but rather a demonstration that he is indeed the Messiah. Yeshua wants John to know for sure. However, Yeshua, knowing John, also adds a small detail he knew maybe only John would catch. In his quote of Isaiah 61:1, Yeshua adds “the dead are being raised,” a detail not actually in Isaiah 61:1. The only other place this particular phrasing of Isaiah 61:1 has ever been found with the added words “the dead are being raised” is in the Dead Sea Scrolls (in scroll 4Q521). In my opinion this was a sort of personal nod or wink to John, adding even greater emphasis to his response.

And why was he wandering around in the desert? There are some authorities who believe John was sent (or maybe even exiled) from Jerusalem because he was to be the next legitimate High Priest, for the High Priesthood during this time had become corrupt and was controlled by the Romans, who appointed the position based on bribes. If John were to be the legitimate High Priest, it would also make even greater sense why Yeshua had to go to John to be immersed prior to beginning his public work – in order to fulfill “everything righteousness requires (Mt. 3:15).” Yeshua was going to John because of his priestly role.

Although this aspect of John is speculative, what is true is that John was the perfect candidate to be a forerunner for Messiah. John was indeed this Elijah type figure who would usher in Yeshua’s time on earth. As John himself says, “the reason I came immersing with water was so that [Messiah] might be made known to Israel” (John 1:31).

Each of us has a role similar to John. We too are to be preparers for Mashiach. We need to prepare the world for Messiah’s return, and become participants in ushering in the Messianic Age. It is a great task. However, our role has also been divinely selected. G-d has chosen each of us in this particular time for a certain reason. G-d needs you. G-d needs me. Only when working together can we experience the long awaited return of our beloved Messiah Yeshua – may it be soon!

I'm a Rabbi, writer, thinker, mountain biker, father and husband ... not necessarily in that order. According to my wife, however, I'm just a big nerd. I have degrees in dead languages and ancient stuff. I have studied in various Jewish institutions, including an Orthodox yeshiva in Europe. I get in trouble for making friends with perfect strangers, and for standing on chairs to sing during Shabbos dinner. In addition to being the Senior Rabbi of Simchat Yisrael Messianic Synagogue in West Haven, CT, I write regularly for several publications and speak widely in congregations and conferences. My wife is a Southern-fried Jewish Beltway bandit and a smokin' hot human rights attorney... and please don’t take offense if I dump Tabasco sauce on your cooking.
View all posts by Rabbi Joshua →
This entry was posted in Uncategorized and tagged Bible, Chasdei Yeshua, Dead Sea Scrolls, mashiach, Messiah, Messianism, New Testament, Prophets. Bookmark the permalink.

6 Responses to A Man of Mystery