From Holocaust to Human Rights 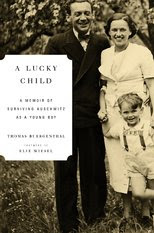 Tune in to C-SPAN on Sunday at noon [ET] for a discussion with Thomas Buergenthal, Auschwitz survivor-turned-judge at the International Court of Justice.  He’ll discuss his new book, A Lucky Child: A Memoir of Surviving Auschwitz as a Young Boy.  I had the pleasure of meeting him briefly during law school after his lecture at the Organization of American States on the formation and priorities of the ICJ … and have always wanted to hear him discuss his personal story as a Shoah survivor.

This just gives further credence to my theory that at the helm of almost every major human rights organization or social justice-oriented institution is a Shoah survivor or one of their descendants.
Yet another Jewish superhero, if you ask me.

Chocoholic, jazz head ... prone to rants, and a professional pitbull. I married a terrific guy who happens to be a rabbi, so I guess that makes me a rebbetzin. Who saw that one coming? My grandparents survived the Shoah and spent their lives in the service of others. On my best days, I walk in their footsteps.
View all posts by Monique →
This entry was posted in Uncategorized and tagged holocaust, human rights. Bookmark the permalink.