Should a Jew break Shabbos to save the life of a non-Jew?
We think the answer to this question is a pretty obvious yes, but were dismayed to find genuine controversy on this within elements of the ultra-Orthodox community. 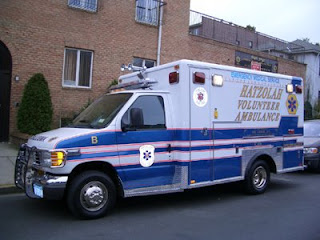 A brief article at CrownHeights.info reports that the Hatzalah (religious Jewish ambulance service) was called to the scene of a car accident on Shabbat morning last week. The frum responders, who willingly broke the prohibitions on work and travel for the sake of pikuach nefesh (to “save a life”), soon learned that the accident victims were non-Jews, whose needs were being addressed by New York state EMTs. They stayed at the scene to assist the accident victims:

Shabbos morning at around 9:30, Hatzalah was called to the scene of a motor vehicle accident on Empire Boulevard and Albany Avenue. It is unclear who called or why, but Hatzalah responded and treated two drivers both of whom were not Jewish. A minivan and a small SUV collided mid-intersection, sending one of the cars up onto the sidewalk. None of the drivers suffered any serious injuries. One driver did complained of back pains, while the other refused medical attention altogether. Two members of Hatzalah responded to the scene. Upon arriving, they saw that FDNY EMS was already at work on the scene. The Hatzalah members cancelled their ambulance and gave assistance.

We read this story and thought “great example of Jewish tikkun! The responders had the expectation that a fellow Jew was in distress … but when confronted with a different reality, they offered their assistance.” Definitely

He who desecrates the Sabbath for the sake of one who is critically ill, even if his efforts prove unnecessary or fruitless, is sure to receive a reward; for instance, if the physician has said that the sick person needs one fig, and nine men have plucked one fig each for the sick man, they have all earned a reward from the Almighty, blessed be His name, even if the patient has recovered from the first fig … there is nothing that supersedes the saving of human life. (Chapter 92)

We don’t see within Jewish texts any distinction between the mitzvah of saving the life of a Jew versus the mitzvah of saving the life of a non-Jew. How frustrating, then, to see commenters assert otherwise.
But of course, “there is nothing new under the sun.” Even during the life of Mashiach, Jews were squabbling about pikuach nefesh. In Matthew 12:10-13, Yeshua heals a man with a shriveled hand. In Luke 14:1-6, Yeshua heals a man whose body was swollen with fluid. Neither impediment was necessarily “life threatening.” Both were likely considered “minor ailments,” the treatment of which was arguably prohibited on Shabbat. It’s significant that Yeshua’s actions did not break Shabbat in the first place, as the healings occurred through miracles, rather than any physical act. Still, his public choice was provocative enough to set the crowd tittering.
The arguments Yeshua presented to support his position were numerous, including:
Although none of these scenarios addressed the healing of a non-Jew on Shabbat, we’re pretty confident that the Messiah who will cure a “minor ailment” on Shabbat via miracle would support the rescue of a non-Jew (through physical action) in serious danger. In the words of the Shulchan Aruch, “It is a grave sin to carry piety to the point of idiocy.”

Chocoholic, jazz head ... prone to rants, and a professional pitbull. I married a terrific guy who happens to be a rabbi, so I guess that makes me a rebbetzin. Who saw that one coming? My grandparents survived the Shoah and spent their lives in the service of others. On my best days, I walk in their footsteps.
View all posts by Monique →
This entry was posted in Uncategorized and tagged mashiach, pikuach nefesh, tikkun olam, torah, Yeshua. Bookmark the permalink.