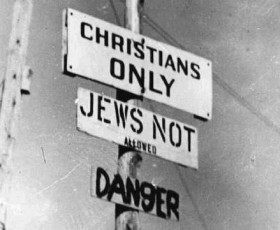 Many of you will remember Benjamin from Metropolis (not a real name, of course, as Metropolis is the city of Superman). Benjamin is a new follower of Yeshua from a religious Jewish background. He lives in a city that has no real Messianic Jewish synagogue. If you read yesterday’s post, then you’ll understand when I say Metropolis has a large Hebrew Pentecostal congregation and in the surrounding areas there are a number of other congregations that fit into various categories. None are a satisfying home for Benjamin, since he had a good life in Judaism before coming to Yeshua. (See “What a Jew Needs from MJ” and “How to Be a Messianic Congregation #1” for more of Benjamin’s story).

Benjamin and I stay in regular communication and, I hope I can say I am helping him through his early education in Yeshua-faith. He spent Rosh Hashanah here in Atlanta with our congregation. And even though we are, in the terms I shared yesterday, a Blended Messianic Congregation, it was like fresh water to Benjamin to see Yeshua at the center of a true synagogue service.

Now, on my suggestion, Benjamin is trying some churches (and looking to get re-involved in a mainstream synagogue, perhaps, since he can’t get Jewish prayer in a Messianic congregation there). His experience in Church-Land so far has been dreadful. I didn’t think it could be worse than in the so-called Messianic congregations, but at least in a bad Messianic group people are usually sympathetic to Jewish concerns on some level. Yes, you guessed it: Benjamin has already been told that it is wrong to be Jewish!

Christians, pastors, if a Jewish person comes to your church, I can only hope that you will handle your interaction with them far better than the Calvary Chapel near Benjamin’s home. Calvary Chapel is a denomination founded in Dispensationalist Christian theology (they believe in Israel’s ongoing election as the Chosen People but they equally believe the Torah was abolished in Christ). I had thought Benjamin might have a good experience at a church where it is a good thing to be pro-Israel.

In one of the first studies at Metropolis Calvary Chapel, the leader was . . . I’m not making this up . . . doing a study on the meaning of “the Jews” in the Gospel of John. What a week for Benjamin to visit. I got an email late that night: Derek, what do I say to this kind of anti-Jewish rhetoric in a church?

This week, Benjamin spoke during small group, since the small group leader asked for people to share stories of things that had “brought them closer to Jesus this week.” He spoke about a Jewish custom of mourning, remembering the anniversary of deceased loved ones, and how he had a moving experience this week with his faith and remembering his departed loved one.

The person leading this week’s small group time was “uncomfortable with my keeping the law,” says Benjamin. He “asked me to go home, pray for the Holy Spirit to give me discernment as to what Scripture says, and read Romans and Hebrews.”

I wish I had been there. I would have agreed to read Romans and Hebrews if the small group leader would read Deuteronomy, Isaiah, Acts 15, and Romans 11. Oy! Why do people whose knowledge of the Bible is limited strictly to the Pauline corpus, a bit of Revelation, a touch of Psalms, and Genesis 1-3 think they should be Bible teachers!

I weep to think of the hundreds of thousands of Jewish encounters over the years in churches. The gospel to the Jews, apparently, is this: “Repent from your Judaism and stop being Jewish so you can be saved by following a Jewish Messiah who went to synagogue, kept the law and traditions, and then died on the cross so no one else would ever have to keep those dreadful laws again.”

It is such a non-sensical gospel and asking Jews in Christ to quit being Jews is exactly what has made Jewish faith in Jesus so rare. Even Jews who don’t observe the Torah are generally offended by such anti-Judaism.

Just yesterday a Christian couple who knows better emailed me. They said they feel a sense of despair. They have connections and relationships in multiple churches. They try to influence people to be pro-Jewish and understand the wonderful Jewish context of the New Testament. They constantly run into angry teachers and laypeople who are convinced that the Church has replaced Israel and that the Torah is some horrid system of ceremonialism and asceticism which Christ died to free us from. They asked me: “What can we do to be more effective in opening the eyes of these Christians to a Jewish-sensitive reading of the very Jewish book we call the Bible?”

I told them, “One at a time.” We cannot finish the task. We cannot teach everyone. But neither are we free to desist from the task. Church-land needs to change. If you haven’t heard of the New Perspective on Paul or read any of the spate of books presenting the Jewish Jesus, where have you been hiding? This is not just an issue for people who live in Jewish areas. If you are a Christian, your Bible is Jewish. It is time you learned.

Commercial: You might start by reading my Yeshua in Context: The Life and Times of Yeshua the Messiah and Paul Didn’t Eat Pork: Reappraising Paul the Pharisee.

This entry was posted in Christian, Judaism, Replacement Theology, Supersessionism. Bookmark the permalink.

54 Responses to Jewish Adventures in Church-Land