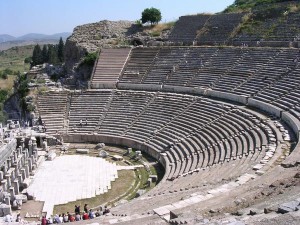 For many, Melito’s words sum up the message of Paul. Christian scholarship in New Testament circles followed this line of reasoning with tragic consequences in World War II. There is a definite correspondence between this reading of Paul and the Holocaust. To anyone unaware of the sad contribution of Christian scholarship to the justifications of Naziism, I am sorry to be the bearer of bad news. Again, I recommend you read R. Kendall Soulen’s The God of Israel and Christian Theology. Or you might check Barry Horner, Future Israel, for some more Reformed and conservative Protestant commentary on the matter.

The gospel of Paul to the gentiles was tragically misunderstood (and still is in many quarters). The situation in Pauline studies today is much better. The “New Perspective” on Paul is much more amenable to a Jewish-friendly reading of Paul (although, some in the New Perspective category continue to say that for Paul Torah is obsolete).

I might sum the situation up this way: gentiles receiving the gospel in the first century were like those who come late to a conversation and miss an essential point. How did Paul’s message come to be mistaken for something it is not? How can we explain this unnecessary reading of Shaul the Pharisee?

First, for anyone fairly new to discussions of Paul and Judaism, here is a basic point that illustrates the problem. This is the Paul of Christian children’s literature. Recently on Facebook someone commented to me that they had just run across this very thing. It is the old chestnut about Paul versus Saul. The Sunday School version goes like this: Saul, a Jew, discovered Christ, converted, and got a new name: Paul the Christian.

Never mind that the New Testament provides dozens of examples that should prove otherwise to any reader. Never mind that Shimon (Simon) also had a Greek name, Peter. Never mind that in the Greco-Roman world Jews from the land of Israel frequently had both Hebrew-Aramaic names and Greek names (Honi-Onias, Yohanan-Markos, Silas-Silvanus, Joseph-Justus, etc.).

Paul has even been thought to have been of small stature physically, largely because his Greek name (Paulos) means little. But he would likely have been given both names, Shaul (Saul) and Paulos (Paul), as an infant. He may have been of normal or even large stature for all we know, at least as far as the evidence from his name is concerned.

Saul the Jew is also Paul the Pharisee. Paul the Christ-follow is also Saul the Christ-follower. But when his mission became the gentiles, his associations largely came to be in the Greco-Roman world where Paul was more familiar. He did not, like Abraham, have some sort of name change to mark a shift in his religious experience.

And now for the main question: how did Paul come to be so misunderstood as the inventor of a new religion, the anti-Torah apostle? Part of the problem is that an idea occurred to the church fathers which I doubt ever occurred to Paul or the Jewish apostles and first generation leaders: that the Jewish way of life should come to an end through faith in Yeshua.

Simply put: Paul did not have to say in his letters, “these instructions on way of life are specifically intended for gentiles” or “my fellow Jews in Messiah, keep the commandments and traditions.” The Jerusalem Council (Acts 15) did not have to deliberate about the status of the Law of Moses for Jewish adherents of Messiah. It was a given that Torah and Jewish life in Messiah were a unity.

Paul’s letters are instructions for the gentile churches. People will object: but there were some Jews in those congregations. That may be. But what Jewish practitioners did not need was a letter about a way of life. They already had a way of life. It was the gentiles who needed to learn a new way, forsaking Greco-Roman ideas in some cases concerning morality.

People will object: but Jew and gentile are one in Messiah. Well, so are men and women, husbands and wives. Unity does not eliminate diversity. The best unity, as in marriage, is unity in diversity. Maleness and femaleness are not eliminated any more than Jewish identity and the national or ethnic identity of non-Jewish peoples. Cappadocian Christians and diaspora Messianic Jews were in unity, but not uniformity.

Try reading Paul’s letter according to this paradigm. His instructions are not against Torah, but against the requirement that gentiles keep Jewish-specific commands as if this is the only way to be right with God.

Simply, Paul’s gospel includes this element: gentiles don’t have to live like Jews to be kosher to God.

In #3, examples of statements about Torah and Jewish identity in Paul and how they relate to the question.

8 Responses to Torah and New Testament, #2