The Sad Fall from Acts to Justin Martyr 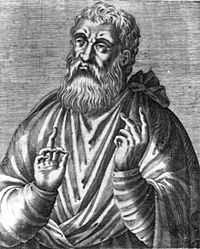 I could have called this the sad fall from Stephen the Martyr to Justin Martyr. Justin Martyr lived from 103-165 CE. Stephen died in 30 CE. The story of Stephen was written down somewhere around 80-90 CE by Luke.

So, how much did the theology of the movement of Jesus’ followers change from Acts to Justin Martyr’s dialogue with Trypho the Jew? Consider two quotations, one from Stephen’s accusers and one from Justin Martyr and you be the judge. How did the accusations of those who opposed the apostles end up becoming the Church’s official doctrine?

But we do not trust through Moses or through the law; for then we would do the same as yourselves. But now–(for I have read that there shall be a final law, and a covenant, the chiefest of all, which it is now incumbent on all men to observe, as many as are seeking after the inheritance of God. For the law promulgated on Horeb is now old, and belongs to yourselves alone; but this is for all universally. Now, law placed against law has abrogated that which is before it, and a covenant which comes after in like manner has put an end to the previous one; and an eternal and final law–namely, Christ–has been given to us, and the covenant is trustworthy, after which there shall be no law, no commandment, no ordinance.
-Justin Martyr, Dialogue With Trypho the Jew, ch. 11

Then they secretly instigated men, who said, “We have heard him speak blasphemous words against Moses and God.” And they stirred up the people and the elders and the scribes, and they came upon him and seized him and brought him before the council, and set up false witnesses who said, “This man never ceases to speak words against this holy place and the law; for we have heard him say that this Jesus of Nazareth will destroy this place, and will change the customs which Moses delivered to us.”
-False accusers speaking of Stephen, Acts 6:11-14

How did the view of the Torah decline from Acts to Justin Martyr so thoroughly and quickly? How did false accusations by opponents of the gospel become the theology of the Church?

Read R. Kendall Soulen’s The God of Israel and Christian Theology for a thorough treatment.

This week: The Torah in Relation to Jews and Non-Jews in Messiah. – A new series exploring the vexing questions on the minds of many. Isn’t it true that Torah is abrogated in Messiah (in Christ)? Isn’t that Paul’s message? Isn’t that what Acts 15 says? And if you say Torah is not abrogated, doesn’t that mean that non-Jews in Messiah must become Sabbath observers and keep all the commandments?

3 Responses to The Sad Fall from Acts to Justin Martyr