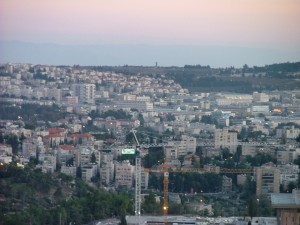 Series Retrospective: I’ve written and some have commented on a number of issues that have likely had something to do with what got many of us involved in MJ to begin with. We’ve talked about wanting to see the good news of Yeshua communicated intelligently in a Jewish context, a greater appreciation for the Hebrew Bible, more appreciation for Jewish history and culture, the promotion of the Torah parashot as a study discipline, a mutual rejoicing in the Mo’adim (feasts), and making a home for Jewish believers.

One issue that has a high likelihood of having brought us together, a common cause that has made us in MJ as close as family, is advocacy for the land and people of the modern state of Israel. On this issue, we circle the wagons against numerous enemies, even from within Judaism and certainly within certain Christian circles.

How important has keeping up with news about Israel, advocacy for Israel, promoting tourism to Israel, and giving to charity work in Israel been for you? How does a word like Zionism sit with you? If you’re not in MJ and you wonder why this is so important to us, what would you like to ask?

My story is sort of backwards. I came to Jesus and through Jesus found Judaism. I had this turning point in life during early college years. I’d known Jesus was real for about two weeks when I discovered he was Jewish. In spite of the fact that my newfound Christian friends knew this about Jesus, it made no difference to them. I could not let it rest and I could not find an explanation in my new Christian circles for things like the lost Jewishness of our faith.

The following semester at Georgia Tech, I had a choice to make. I wanted to pursue this Judaism and Jesus thing. I dropped out of school (with an excellent grade point average, thank you very much) and used the tuition money to sign up for a big Israel tour. It was the Shavuot 1988 Messianic Jewish mega-tour of Israel. We had 1,500 Messianic Jews and Christians on the tour. I’ve never been the same.

Another aspect of my experience, and perhaps many of you can relate, is my exploration at that young age of the history of anti-Semitism in Europe and the Holocaust. I read about the Holocaust and then the formation of the state of Israel. The two go together and the connection should never be forgotten.

On my latest trip, which was several years ago, the connection came alive for me again as I toured, for the fifth time, the Yad VaShem (the Holocaust museum in Jerusalem). After a few hours walking through a history of disenfranchisement, discrimination, then violence and genocide, I emerged, like millions of other museum visitors, onto an overlook at the museum exit with a panoramic overview of the new neighborhoods of Jerusalem.

The Yad VaShem visitor literally emerges from the darkness to take in the view of life and light that is new Jerusalem.

Those who have decided to take up the cause of Israel’s enemies should consider this and be transformed by it. The lies about the state of Israel multiply year after year. Christians write books disavowing Israel, claiming God has nothing to do with the people of Israel and that Christians have replaced Jews as the people of God. These books say the land does not matter and this is all past and done. The Christian Left is now as firmly entrenched in the process of making shallow politics the gospel as the Christian Right ever was. And Israel is not loved by the Christian Left.

Meanwhile, some American Jewish groups seem to be confused about the matter. A good instinct for justice and to fight for the good of the down and out Palestinians has turned into anti-Israel advocacy in many cases.

Israel has many enemies. Virtually none of Israel’s enemies would do, in their own backyard, what they want Israel to do.

The anti-Israel spirit in the world looks remarkably to me like Revelation 12. It is demonic and blind. Of course, advocacy for Israel can err as well, for no government or army or people will pursue biblical justice and goodness wholeheartedly. But the facts continually elude Israel’s enemies.

I am delighted that in 2012 the Union of Messianic Jewish Congregations (UMJC) will focus on advocacy for Israel. I just heard today that the UMJC and the Messianic Jewish Alliance of America (MJAA) are joining together in a prayer initiative for Israel (see more about it here). The UMJC and MJAA have given and worked for the state and people of Israel in many ways over the last few decades. For a small movement, we have done a great deal on behalf of the nation of Israel. The Israeli government is well aware of Messianic Judaism’s friendship and many good relationships exist today because of it.

When we visit the land of Israel, as Messianic Jews, we feel at home. This is not only the land that connects us to the Bible and Messiah, it is the land that is mystically ours, a forerunner of the world to come. We can already see the grape vines increasing on the Judean hills until that day when the hills will drip with sweet wine.