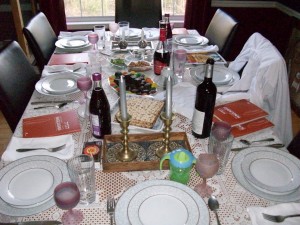 Issue for Week #5: We want to a greater appreciation for the Mo’adim (festivals, holy days).

How it Works: I will be posting issues for discussion every Monday or Tuesday this summer. We can discuss the issue all week long. We welcome comments by by a variety of viewpoints and request brevity and politeness in commenting.

A man has nought else to do on a festival save to eat and drink and study. Divide it: devote half of it to eating and drinking and half of it to the Beit Midrash (house of study).
-Rabbi Joshua, Babylonian Talmud, Pesahim 68b.

Let there be lights in the expanse of the heaven . . . and let them be for signs and festivals (מועדים, mo’adim).
-Genesis 1:14.

The appointed seasons (mo’adim) were given to Israel for no other reason than for them to enjoy themselves.
-Tanhuma Bereshit §4.

It’s such a burden to be keep the Torah! This is a sarcastic line a friend at Tikvat David shares around the table every year as we enjoy Shavu’ot or Sukkot with the smell of grilling steak, with the abundance of cold beer, and usually a serene setting lakeside or in the mountains of Georgia.

In the smorgasbord of world religions, you have to admit Judaism is one of the livelier, more enjoyable of faiths.

When our synagogue used to meet at a church, we met with the elders to discuss arrangements. I asked if they had a problem with us bringing in a small amount of wine for some ceremonies. The discussion led to Deuteronomy 14:24-26. I was worried they might have a problem and think we were alcoholics. But they were all laughing and could not believe the Bible actually commends purchasing wine and beer! They often reminded me about that meeting afterwards and laughed, saying, “We ought to come to your events!”

What does the Lord require of you, O Israel? To rejoice and enjoy food and the company of good friends with Psalms and prayers and some good Torah learning. It’s tough to be a Jew (or a Messianic Jew or a Judeo-Christian).

For many in the Messianic Jewish movement, whether Jewish or non-Jewish, the feasts were the entrance into Torah living.

For me, it was Passover. I was nineteen years old for my first Passover. It was mysterious, a little weird, but I couldn’t get enough. I especially remember the parsley dipped in saltwater and the Haggadah. You’d think the horseradish might have made more of an impact on me, but somehow the idea of eating a sprig of parsley captured my imagination. The leader, a Jewish Christian (not a Messianic Jew, if you comprehend the difference), made some d’rash about the parsley and life, new life in Messiah. I think he quoted Colossians 2:7, about being “planted and built up in him and established in the faith.” Maybe it wasn’t very traditional (quoting the New Testament at the Seder?), but the whole idea of edible symbols and Bible verses was thrilling.

For many Christians, the feasts are the most interesting aspect of Judaism. For one thing, it has happened that many Christians, finding Passover and Weeks (Shavuot, Pentecost) and Tabernacles (Sukkot, Booths) in their Bibles, have wondered why these are not as important or more important than Christmas and Easter. A common cycle of thought happens for some: we should celebrate the “biblical” holidays and not the “pagan” festivals.

For many less-than-observant Jews, Passover and High Holidays and Hanukkah are Judaism. I’m not sure if the numbers have been changing in the last five years, but last time I read surveys of Jewish observance, some 70% of Jewish people participated in Passover Seders each year and slightly more attended High Holiday services.

We used to meet about half a mile from a Conservative synagogue in the Atlanta area. I remember at Rosh HaShanah and Yom Kippur you could hardly drive in the area because cars were park for a mile up the road. I’ve tried to explain to Christian leaders, this is not like the slight surge in attendance at church during Easter and Christmas. If churches saw a similar seven-fold multiplication of attendance, they would really understand.

So? What do Messianic Jews Have on the Holidays?

I believe that when it comes to the mo’adim, Messianic Judaism has a great deal to offer. These festivals and celebrations resound all the more with life and spiritual depth for us. You see, and argue with me if you think I am wrong, we might be compared to the more mystical and charismatic strains of Jewish practice (think of some of the positive aspects of Hasidic life).

The mo’adim for us are an occasion to celebrate Messiah. The “messianic” in Messianic Jew comes out nowhere quite like the holidays and observances. We’ve got spirit. We’ve got Messiah. We have already in our fledgling movement a strong tradition of musical enjoyment, dance, and reflection on Messiah at the holidays.

A Messianic Jewish Passover Seder has all the depth of a mainstream Seder with a whole lot more to add to it. In my opinion, there’s no Passover like our Passover. It is the quintessential Messianic Jewish celebration and remembrance. Yes, you can say that for mainstream Judaism also, but the Last Supper traditions of the gospels and the Passover-crucifixion-resurrection themes add layers of meaning to the Exodus-redemption-election themes of the traditional Haggadah.

Shavuot (Weeks, Pentecost) is generally a minor observance in modern Jewish life. Surveys of Jewish observance do not include major number of participants in Shavuot ceremonies. But in Messianic Judaism, the story of Acts 2 adds to the story of Exodus 19. For us Shavuot is about the giving of Torah at Sinai and the giving of Spirit at Jerusalem just after Yeshua’s ascension. And we have the Law-and-Spirit passages such as Romans 8 to meditate on in addition to the more traditional Shavuot passages.

I could go through each holiday and speak about Messianic Judaism having all the meaning of Judaism but with more added.

And besides that, we emphasize rejoicing in a way that might make others in the Jewish community wonder if we are crazy. We have a tradition of dancing and lively music. I know some of my colleagues seem embarrassed by some of the pageantry and revelry of things like “Davidic” dance. I’m not embarrassed by it at all. Somebody, for goodness sake, ought to be applying the scriptures about dancing! So what if more sober and serious Jewish communities may not use music and dancing as much as we do in holiday and Sabbath observances. 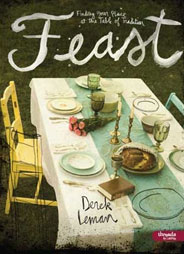 One of my best-selling books is about the Feasts for Christians (see it here at LifeWay.com).

I believe Passover is a neglected and forgotten observance of the Church. While Pauline Christianity (the gentile churches to whom his letters are written) followed the teaching of the Jewish apostles that non-Jews need not keep sign commandments of Torah (Sabbath, festivals, circumcision, dietary law, fringes) in order to be “kosher” to God, I believe Paul would say the modern Church is crazy not to make Passover a central, annual observance.

Read up on the Quartodeciman controversy (check wikipedia) and keep in mind: Pascha for these Asian elders might have been a Passover observance. Read 1 Corinthians 5 and consider how these Yeshua-followers in Greece understood Passover (it seems as if Passover was familiar enough to them that we might say they practiced it).

But most of all, consider that Yeshua’s last meal with his disciples was a Passover-like meal (I have written on the issue of timing of Passover and the Last Supper and concluded that it was a night before the Seder). And early pre-Passover meals were normal for pilgrims to Jerusalem like Yeshua and the disciples. And Yeshua said, “As often as you do this . . .” This? You know: a Passover-like meal.

Messianic Judaism has a vested interest in teaching our Christian friends about the mo’adim. We’re not trying to turn Christians into Jews. But we think (rightfully, in my opinion) too much of the Jewish original context of life with God was lost in the early centuries and for the wrong reasons.

And when it comes to Jesus, few things illuminate his life and the meaning of what he enacted in the cosmos more clearly than the mo’adim. Yeshua is the completer of the themes of Passover, Firstfruits, Shavuot, Rosh HaShanah, Yom Kippur, Sukkot, and newer holidays such as Purim and Hanukkah.

Briefly describe how a feast or holy day observance was vital to you in your growth in the knowledge and practice of your faith (as a Jew, a Messianic Jew, or a Christian).

Why are the holidays of the Torah so important? What are your favorite themes?