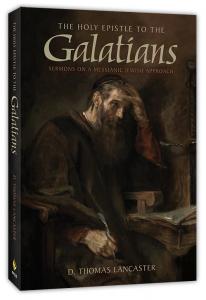 You don’t want the book to be too academic or too simplistic. You wan’t the book to be inspiring as well as informative. You want it to be a fairly easy read with enough depth to really make people think.

You want Daniel Lancaster’s new volume, The Holy Epistle to the Galatians. You can get it here.

If you really want to help someone understand quickly the ways Christianity messed up the Jewish question and mislabeled the Torah as obsolete, get right to chapter 19, where you’ll find helpful comments like this one:

We can call this “One New Man Theology.” The one who espouses One New Man Theology actually implies that there are no Jews in Messiah whatsoever. Jewishness is erased by Christ. The Messiah obliterates the identity of the distinctive people of Israel, the heirs of the forefathers, the people of the covenant.

For most of the last two thousand years, this is what happened to every Jewish person who became a believer. . . . This is ironic because Christianity always bemoans the fact that the Jewish people are so hard to reach with the gospel. Christians wonder why there are so few Jewish believers. . . . Hundreds, thousands, tens of thousands, and hundreds of thousands of Jewish people have come to faith in Messiah and become Christians over the last century and half, but they are almost all gone — vanished.

Wow. He goes on to explain that “neither Jew nor Gentile” doesn’t mean no Jews and that “one new man” doesn’t mean everyone becomes a Christian (with Jews giving up Jewish identity).

He then addresses the other side of One New Man which is One Law. It says that the One New Man is Gentiles becoming Jews (in essence). Being grafted in, all believers in Jesus start living like Jews.

Lancaster shows clearly and patiently this isn’t what Paul is advising at all, in Galatians or in his other letters:

Sociologically speaking, One Law is the end of Jewish identity for Jewish believers. In its place comes a new pseudo-Jewish/Gentile identity in which differentiation between the two vanishes.

Lancaster shows that Christianity has sin on its hands, historically speaking, for distorting the gospel in a way to keep Jewish people from faith in Jesus. This point is one recognized by many Christian and Jewish theologians and Lancaster is not out on a limb by himself calling for an end to supersessionism (replacement theology).

I just got an advance copy of The Holy Epistle to the Galatians yesterday and have read only chapter 19 and a little in a few other chapters. There are many topics and explanations of immense value in the book.

In my opinion, the book isn’t perfect. Lancaster thinks the influencers (often called Judaizers) referred to in Galatians were believers in Jesus. I don’t think so and have represented the view (as per Mark Nanos, Irony of Galatians) that they were synagogue proselytizers in my book Paul Didn’t Eat Pork (get it here on amazon).

But a minor disagreement here or there won’t keep me from using Lancaster’s book, recommending it to people in my congregation and those who inquire through the blog and my various websites. It is a rare thing: a popular level explanation of Galatians that gets it right. And it is the right book for people who don’t have time or the inclination to read academic books which spend much time on comparing the views of all other scholars and considering all possible interpretations.

The Holy Epistle to the Galatians is an inspiring read that will motivate readers to see and live the bigger picture of God’s way, to be led by the Spirit, to long for the faith of Israel to be in Messiah, to better understand the good news for the nations, and to understand the grace of God as revealed in Yeshua.

This entry was posted in FFOZ, Gentiles, One Law, Replacement Theology, Supersessionism. Bookmark the permalink.

8 Responses to Daniel Lancaster on Galatians