I’m reading Patrick Rothfuss’s The Name of the Wind, a very well written novel in the fantasy genre (a genre I love and which I am writing in as you can see here). One his little side stories made me think about religious versus atheistic stories and what relation they have to love, goodness, and activism to help and change the world. 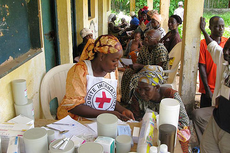 I’m not seeking to prove or even give evidence for or against any religion in this musing. I have to say honestly, though, that I am dissing the atheists’ story. So maybe I’m giving a subjective argument against the materialist-naturalist-atheist meta-narrative. But you be the judge.

I’m interested in the main Jewish and Christian stories. Some of what I say here could be equally applied to Muslim, Hindu, Buddhist, and I’m sure other religious stories. That’s irrelevant to me for now. Mainly, I’m interested in how the atheism story doesn’t line up in spite of the protests and feeble Vulcan logic of Hitchens and the other new atheists. (Actually, Spock would do far better, so I shouldn’t malign the Vulcans).

There are four stories I want to comment on:
(1) The Mount Sinai story.
(2) The Yeshua (Jesus) story.
(3) The world to come story.
(4) and the materialist-naturalist-atheist story.

The Mount Sinai story selects a people (the Jewish people) and appoints them as the priests of divine holiness to the world. Included in the demands of this story are ritual issues (the purity laws) and ethical issues (treatment of the poor, the marginalized, love of neighbor, etc.). I’m not saying the Mount Sinai story has no problems (slavery tolerated and legislated, divine warfare, etc.). But it is a story raising human beings up to a level of responsibility and inspiration through promises of union with God.

The Yeshua (Jesus) story assumes the truth of the Mount Sinai story (a fact sadly distorted in Christendom as plenty of Christian theologians will agree). It is a story of a man who came healing and serving and who ultimately remained faithful to a vision of hard calling from his Father (God) who required death in the face of evil.

The Yeshua story, properly interpreted, leads followers motivated to join Yeshua in the work of healing, serving, and even sacrificial love. Just as Jewish history has examples of faithfulness as well as unfaithfulness to the story, so does this one. Judaism motivates many to loving activism and so does a vibrant, biblical Christianity.

The world to come story, properly interpreted, is not about ignoring this present world but renewing it in stages along the way to the world to come.

By contrast with all of these, the materialist-naturalist-atheist story rejects any transcendent beginning for human beings and any goal or purpose for history or the future. We came from randomness and end in randomness. Feeble attempts at ethics include the idea that “we’ll be happier during out short, meaningless lives if we give to charity and/or work for peace and wellness.”

The points at which the atheist story actually works are the points which undercut and overthrow the story itself. For example, we might compare human life to a dying patient in a sick bed. And one kind of atheist story could go like this: to be ethical is a beautiful thing, like giving water to a dying child to ease their passage. That sort of story is moving. But it is moving precisely because it values something irrational and wonderful, something non-material and supernatural. It values love for love’s sake. It values comfort and nourishment. It looks beyond this life, admit it or not, and suggests that such values have enduring meaning.

Theoretically, religious faith leads to greater love and goodness and activism. In practice, we know that religious faith is linked to hypocrisy and evil as well. Theoretically, atheism leads to abandonment of values and ethics. In practice, we know that in many cases agnostics and atheists practice love, goodness, and activism.

The difference is that theory in the religious stories lines up with what practice should be.

And that makes the materialist-naturalist-atheist story a false one — if you believe in love and goodness and activism.

This entry was posted in Atheism, Faith. Bookmark the permalink.

10 Responses to God-Stories vs. Godless Stories