Not Jewish Yet Drawn to Torah, Part 8 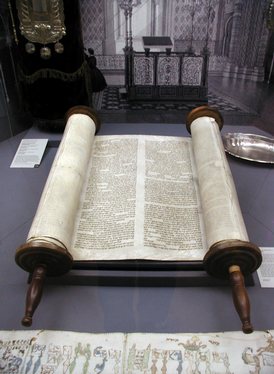 This article is way overdue! I had people facebooking me two weeks ago saying, “Hurry up!” A short summary of the issue in this series: many non-Jews have been drawn into Messianic Judaism and various Judeo-Christian groups in the past three decades. In many places, Jews and non-Jews are together in community and practice.

I’ve been suggesting guidelines and principles to maintain a few vital axioms: (1) Jewish identity is precious to God and should not be ignored or made light of, (2) healthy Messianic Judaism and Judeo-Christian thinking is positive about Christianity and Judaism, and (3) there need to be ways for Jews and non-Jews in community together to make distinctions without marginalizing any person.

Here in Part 8, I’m going to talk about halacha, guidelines for walking out Torah, in terms of mixed communities. How can we establish guidelines so non-Jews do not assume a false or shallow Jewish identity? How can we have valid Jewish practice in mixed communities? It is important, if you are a person involved in MJ or a Judeo-Christian (Hebrew Roots, Two House, One Law) group to catch the information in the other seven parts. Here we go with Part 8.

.
.
Tradition, Halacha, and Community
“Every man did what was right in his own eyes,” in Judges 17:6 and 21:25 is not a praise for individualism. Our Western tendency to say the individual can and should ignore family, community, religion, and nation to do whatever seems best is not a sound approach to life. God did not make us independent of each other.

Some parts of Messianic Judaism and various Judeo-Christian groups have historically been foolish with regard to rabbinic tradition, with the halacha of the people of Israel. People have perpetuated individual, self-authorized interpretation. “We don’t need no tradition!”

Toward a Tradition Specific to Messianic Judaism
I belong to a rabbinical council known as the MJRC (Messianic Jewish Rabbinical Council), which you can find at OurRabbis.org.

MJ is a small movement. The MJRC is a small group. Its few dozen leaders are also the ones playing many roles for the movement. MJ is, as you might say, woefully understaffed.

The MJRC currently does not have guidelines for distinguishing Jewish and non-Jewish practices within our communities. I am in submission to the guidelines of the MJRC and I recognize that only a set of mutually arrived at guidelines can really suffice.

So, why am I commenting on this matter before the MJRC has issued guidelines? Simple. My community has to live now and not wait for the guidelines to arrive. And many groups and congregations are desperately in need of some practices.

What I suggest in this post is only a beginning and has no authority for anyone. I simply want to raise some issues and makes suggestions.

And, yes, I think non-Jews in groups that are not specifically Messianic Jewish, but in which Torah is kept, should consider submitting to MJRC guidelines when they are released (no date known for the guidelines to be final).

The Kinds of Practice that Are Problematic
God says in Exodus 19:5-6 that among all peoples of the world, Israel is chosen as the treasured people, a priestly people, subject to a higher degree of holiness just as priests are subject to higher holiness than common Israelites. Israel is to non-Jews and the priests are to Israelites. That is why there are holiness regulations for Jews that do not apply as commandments for non-Jews: Sabbath, dietary law, tzit-tzit, circumcision, etc.

In case anyone doubts it, the apostles did not abolish the distinction between Israel as the holy people and non-Jews in Messiah, as also a holy people, also a priestly people, but not subsuming Israel’s place as the firstborn. Read Romans 11 carefully.

But many practices in mixed communities undermine the Irrevocable Election of Israel and the unique covenant at Sinai which is between Israel and God only. Let me say that again: only. Don’t be confused by the fact that many principles of Torah are also universal laws. The Torah covenant contains both specific and universal laws. And don’t be confused by shallow arguments about a “mixed multitude,” or about “one law for the native and the stranger,” which I will not take the time here to refute (I’d gladly do so in a comment if anyone asks).

Here are kinds of practices that need differentiation if we are to respect the idea of Jewish identity:

(1) The blessings over the Torah scroll which include sayings like, “who selected us from all peoples and gave us his Torah.” This is true only of Jews. Non-Jews should not recite these words. A substitute suggestion will be made below.

(2) Some other prayers may be acceptable based on the intent (kavanah) of the worshipper. For example, the first paragraph of the Aleinu could be prayed by a non-Jew possibly who intends to understand it properly. The intent of the prayer is to describe Israel’s place as the elect people, but this expression is phrased in terms of a people called out of idolatry, which is true of faithful non-Jews. Perhaps this kind of prayer could be prayed by a non-Jew with proper intent.

(3) The second and third paragraph of the Shema, when recited as a prayer, indicate inclusion in the covenant between God and Israel. A non-Jew, in order to maintain integrity, might need some type of declared intent to recite this as part of holy Scripture about Israel as a people, without assuming a place in this covenant.

(4) There are undoubtedly other places in the liturgy which may require either a substitution or a clear intent by the worshipper to clarify.

(5) The reading of the Sefer Torah from the Bema or the going up for an aliyah is debatable. Some feel the Sefer Torah (the scroll) is a symbol of the Torah covenant given on Sinai and not for the Five Books of Moses in their more general sense. Some people follow the practice of reserving first aliyah for a Cohen, second for a Levi, and then for an Israelite. Perhaps some would allow a non-Jew to come for an aliyah after. Others may feel that anyone should be able to make an aliyah or read from the Sefer Torah. I will not state my opinion here.

(6) A Brit Milah (Bris, ceremony of circumcision) or a Brit HaBat (naming ceremony for girls). There is a difference between circumcision for aesthetic or hygienic purposes and an official circumcision on the 8th day to be included in the covenant of Israel. It goes against the principle of Israel’s election for a non-Jew to have a Bris. Alternate recognitions of inclusion in the people of God in Yeshua could be proposed (see below).

(7) A Bar or Bat Mitzvah. There is a difference between recognizing coming of age and responsibility in general and B’nei Mitzvah in particular. A non-Jew cannot be said to be Bar Mitzvah or Bat Mitzvah (a son or daughter of the commandment). The commandment is understood to be the covenant stipulations of Sinai. An alternate recognition of education and responsibility can be proposed for non-Jews (see below).

(8) Certain festival and holiday practices can be a problem. For example, some parts of the Passover haggadah are specific about the ones saying them being included in the people brought out of Egypt. Should the Temple be rebuilt, some practices would be forbidden to non-Jews, such as eating the Passover sacrifice itself (Exod 12:48). For the most part, it seems to me that non-Jews who respect Jewish identity can participate in festivals with common sense modifications in wording if necessary.

(9) I will explore tzitzit and tefillin (fringes and phylacteries) in a future post specifically.

(10) My list is almost certainly in need of further specification, but I hope this gives you an idea of the kinds of practices in which it is harmful to the truth of ongoing Jewish covenantal identity for non-Jews not to make some kind of modification or to have some clear notion of proper intent.

Principles of Modification
With regard to the numbered issues above, I will offer some provisional suggestions while we wait for clearer guidelines from the MJRC. I will only comment on those numbered issues which seem to require a specific solution in present practice:

(1) The blessing could easily be modified in more than one way. Here is a simple one: “Blessed are you, O Lord our God, who selected Israel from all peoples and gave to Israel your Torah. Baruch attah, Adonai, Eloheinu melech ha’olam, asher bacher b’Yisrael mikol ha’ammim v’natan l’Yisrael et Torato.” The same could be done with the blessing after and with Haftarah blessings. Such a modified blessing should be written out for the ease of use of a non-Jew reciting it (if you decide to allow non-Jewish aliyot).

(3) Non-Jews could recite the 2nd and 3rd paragraph of the Shema with the clear intent of describing Israel’s national covenant. These scriptures are the precious possession of all believers even if they describe a relationship that is unique between Israel and God.

(6) There is no reason for a non-Jewish family to have their son circumcised on the 8th day. One way to avoid confusion here is for non-Jews to practice hygienic circumcision as is customary in the U.S. and to have a birth or dedication celebration. Of course, hygienic circumcision is not a requirement for a non-Jew either. Here is a worthy principle: to affirm the worth of all our children in Messianic Jewish and Judeo-Christian groups, every child should be afforded a community celebration and sanctification, Jewish boys and girls in the traditional way, and non-Jewish boys and girls in a manner that does not add confusion about identity but which respects the sanctity of birth and of every life.

(7) Similarly, to respect the coming of age of every youth in our movement, it is proper to afford Jews and non-Jews an educational process and recognition. Modifications could easily be made. Some have suggested Bar and Bat Avraham for non-Jews. The problem is that these titles are reserved for converts to Judaism. It should be noted, however, that Paul and the apostles use these exact terms for non-Jews, so they could be deemed appropriate. Other traditions like confirmation could be applied. Or an alternate term could be devised (Bar and Bat Tikvah, Son and Daughter of the Promise).

56 Responses to Not Jewish Yet Drawn to Torah, Part 8