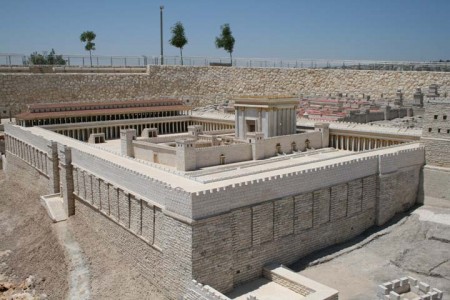 In perhaps the most decisive event in Yeshua’s life he took on the leading institution of Jewish life and made a scene. Most historians studying the life of Yeshua are convinced the action of Yeshua in the Temple was a leading cause of his death. The authorities simply had to consider him a threat afterward.

The story is not without difficulties. In the Fourth Gospel, Yeshua’s action in the Temple is depicted early, at least two Passovers before his death. In Matthew, Mark, and Luke, Yeshua’s Temple action is depicted as one of the last things he did before he was arrested. So, as we look for the context of this action in Yeshua’s life, we are confronted right away by a question: was this something he did early in his career or was it late? Was it one of many actions that identified him to the authorities as a threat or was it the decisive actions leading to his death?

The Temple cleansing story is also critical because on it hangs one of the great questions about Yeshua’s aim and message: was he against the Temple in some way? Did Yeshua come to say that the old way of worshipping God on Mount Zion and offering animals and chanting Psalms was passing away? Did he come to replace Judaism with a new order, a higher spiritual worship replacing the inferior, ritual and physical ceremonies of the Jerusalem Temple?

And the story is hard to understand for another reason as well. One of the hardest things to decide, whether we read it in the synoptic gospels or in the Fourth Gospel, is the question: what was Yeshua angry about?

The stories of Yeshua

This entry was posted in messianic, Messianic Jewish, Messianic Judaism, Sacrifices and Purity, Yeshua and tagged Podcast, Yeshua in Context. Bookmark the permalink.

4 Responses to PODCAST: Yeshua in Context – The Temple Disputes, Part 2