Toward Making Christmas Once Again A Jewish Holiday

Posted on December 21, 2012 by Stuart Dauermann 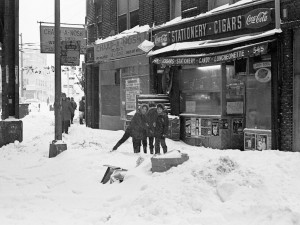 I grew up over a Brooklyn storefront exactly like these.  The weather is familiar too!

I remember when I was a kid growing up in the Flatbush area of Brooklyn, New York. I like to say that the Protestant Reformation hadn’t happened yet where I grew up. You were either Jewish, Italian or Irish, and if you weren’t a Jew, you were Catholic. Period. Oh, there were Protestants around, I guess, but they were invisible compared to the others of us—Catholics and Jews all.

Of course, Christmas made its freezing entrance every year, and snow was a yearly phenomenon. So were Christmas carols. And without anyone explaining anything to me, I just knew that when they sang, “Born is the King of Israel,” that somehow the Christians didn’t mean Israel the way I thought of Israel.  When I thought of Israel, I thought of Jews, people like my Yeshiva attending cousins, and my grandmother, uncle and aunt in Boro Park. For them, and for me, somehow this infant born in a manger was a stranger, and the good news wrapped up in those swaddling clothes was good news for the other guy. Somehow we Jews were still out in the cold, along with Frosty the Snowman, Suzie Snowflake, Donner, Blitzen, Rudolph and Mr. and Mrs. Ho Ho Ho.

For those interested in seeing Jesus rewrapped so Jews might gladly open the present as if it were really for them, read on.

Jesus has become a stranger to Jews just as he has become the property of Christians.  What needs to happen is for many Christians to examine whether the Jesus of their faith has replaced Judaism or whether he is Judaism-friendly. It won’t be enough to say that Jesus was raised a Jew and that He kept Torah. The problem is that much Christian theologizing . . . and hymnody . . . enshrines a Jesus who outgrew or replaced Judaism. And as long as Christians think that way, don’t be surprised if Jews think of Jesus as at best a former Jew. And that is a concept as cold as a Brooklyn December.

Besides conceiving of Jesus as Judaism-friendly, there is a second challenge for those Christians who would have their Jewish friends see him as not only good news for the Jews, but also Jewish good news. And that challenge is for fine and aware Christians to reconnect with how the Christ who was born in Bethlehem, died at Calvary, and rose from the dead, remains the Lion of the Tribe of Judah, the Son of David, the King of the Jews who one day will return to bring to fruition all the promises God made to that chosen nation. The many Christians who deny that this is how the story ends should not be surprised when there is no room for their Jesus in the Jewish inn.

For the rest of you, who are more adventurous, read still further.

1 Response to Toward Making Christmas Once Again A Jewish Holiday