Current Middle East Turmoil: Or, “The More Things Change The More They Remain the Same”

Posted on September 21, 2012 by Stuart Dauermann 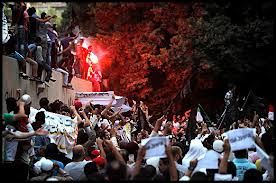 Rioting and mayhem against the West by Muslims claiming intolerable offense.  Is this something new, or is something we have seen before?  Certainly, one needs only to go back about 90 years to answer that question.

The Declaration of the Establishment of the State of Israel of May 14, 1948 states in carefully selected language,

In the year 5657 (1897), at the summons of the spiritual father of the Jewish State, Theodore Herzl, the First Zionist Congress convened and proclaimed the right of the Jewish people to national rebirth in its own country.

This right was recognized in the Balfour Declaration of the 2nd November, 1917, and re-affirmed in the Mandate of the League of Nations which, in particular, gave international sanction to the historic connection between the Jewish people and Eretz-Israel and to the right of the Jewish people to rebuild its National Home.

Notice in particular the bold type phrase which points out that the Balfour Declaration of 1917 recognized (not granted) the right of the Jewish people to the revivification of their ancient homeland. This recognition was historic. It was formative. But it was not universal.

By 1922, the United States Congress ratified the Declaration.  Among the British leadership, Lloyd George, Lord Balfour, and Winston Churchill were all in favor. At Versailles, where the Declaration was promulgated, the western consensus was that the Balfour recognition was morally correct, and that the Jews would prove themselves reliable allies in the region. But forces in the British Foreign Office were diametrically opposed. These were old colonialist Arabists who were convinced that if the British would accommodate the Arab world, the Arab world would become a band of dependable allies from the Sudan in the west to Iraq in the east.  They therefore postulated that since the Arabs were upset with the founding of the Jewish State, therefore, nix Israel.

To undermine Israel’s existence, they sought to win and bribe select Arab leaders whom the British installed as rulers in the area.  For example, the Hashemite Kingdom of Jordan is ruled by a family the British brought from Saudi Arabia to Jordan, formerly known as Trans-Jordan. This territory was comprised of 80 percent of the territory formerly promised to the Jews in the Balfour Declaration!  These British Arabists in the Foreign Office even resisted publishing and distributing the Balfour Declaration in Palestine, so much were they opposed to the Jewish state.

Richard Meinertzhagen, a career British diplomat, was adamantly against this trend. The Arabists in the Foreign Office had been working on Churchill, seeking to convince him that there could be no peace in the region unless and until the Arabs were given yet more land, to be again taken from what had been promised the Jews, so that land east of the Jordan, originally promised them in the Balfour Declaration, was transferred to the Arabs.  Meinertzhagen met with Churchill, unsuccessfully seeking to call him back from the erosion of his own former strong support for a large and thriving Jewish State.

Some in the British government actually encouraged Arab rioting, murder and pillage of Jews, as a means of pressuring the British government to reduce Jewish land, and curtail Jewish immigration, since “clearly” these two offenses were triggering the riots. But these offenses were not the cause, but the occasion for manipulative leaders to enrage the masses for political ends. Like the Intifadas in our more recent context, the riots were a tactic designed to weaken western resolve.   It was during this time that the trend toward identifying the Jews as foreign agitators in the region, the trouble makers without whom there would be peace for all,  became a common ploy, as it remains today.

Another tactic the British employed was to disarm the Jews while leaving the Arabs armed. In 1929, on the Jewish fast day Tisha B’Av, Arab mobs attacked Hebron. killing 113 Jews and wounding hundreds more in a rampage that blotted out six Jewish communities. Hebron, the burial place of Abraham, had been a Jewish city for thousands of years. In response to the massacre, the British disarmed the Jews . . .  but not the Arabs. Intolerable, you say!  You say rightly.

Most Jews preferred to believe supportive British rhetoric and promises of continued commitment to the founding of the Jewish State, with the British simply calling for Jewish patience with a policy of gradualism. But British deeds instead revealed a government prepared to renege on an agreement that no longer suited them.  Ze’ev Jabotinsky was one of the very few Jewish leaders of the day not fooled by British assurances.  He was of course right.

By 1937, the Peel Commission had reduced the original land promised to the Jews to five percent of the original amount promised. By 1939, while Jews were fleeing for their lives from Nazi Europe, the Chamberlain White paper abrogated the Balfour Declaration, limited Jewish immigration to 75,000 more. In fact, the British would bar Jewish immigration to Israel for another ten years.

All of this placating of the Arabs, seeking to win their cooperation, proved to be gullible folly on the part of Great Britain:  Egypt, Syria, and Iraq all allied themselves with Hitler in the Second World War. The British got precisely nothing for all their betrayals,  their broken promises, and their clandestine efforts.

The lesson for today’s situation is this. The Arab world has learned that the West fears civil instability and riots, and that when Arabs threaten or perpetrate violence, the instinct of the West is to placate them, or to remove the alleged cause of offense, thinking that by so doing, we will win or cement friendship with them.

But what is often forgotten, to our peril, is that the Arab world categorically resents Western incursions, and the westernization of their lands.  They also feel themselves to be divinely fated for conquest and hegemony, with all memories of vanished glories bringing humiliation, shame, and eventually fury. The Muslim culture is an honor culture, and any perceived attack on Muslim honor causes a disequilibrium that can only be resolved either by massive obsequiousness by the “offender,” or by undeniable retaliation on the part of the offended.  This is why cartoons of Muhammad result in such violence, because of offended honor that Muslims cannot countenance.  For Muslims to ignore such offenses is to themselves dishonor Muhammad and their own divinely ordained culture, something unthinkable for them.

But we must also realize that violence is not merely a response to offended honor: it is also a well-worn tactic in the Arab world, manipulated by wily rulers, as was the case with Yassir Arafat’s manipulation of Intifadas as a political tool. Therefore, any government which capitulates to violence or the threat of violence in the Arab world is not only revealing a naive vulnerability to this old approach,  which will only win further Arab disdain, but is also forgetting the lessons of history. The friendship of the Arab world cannot be bought, and the western way of life and flow of history will always be viewed as contaminating and unwelcome.  In fact, America is not so much hated because of its relationship with Israel, as Israel is hated as an advance column of the contaminating West.

Therefore, while we should avoid needlessly offending Muslim honor, we should also not foolishly capitulate to the blackmail of violence. The British learned the hard way that placating violence and demands brings no reward but disappointment.

The foregoing is another in a series of articles informed by my reading of Benjamin Netanyahu’s A Durable Peace: Israel and Its Place Among the Nations.